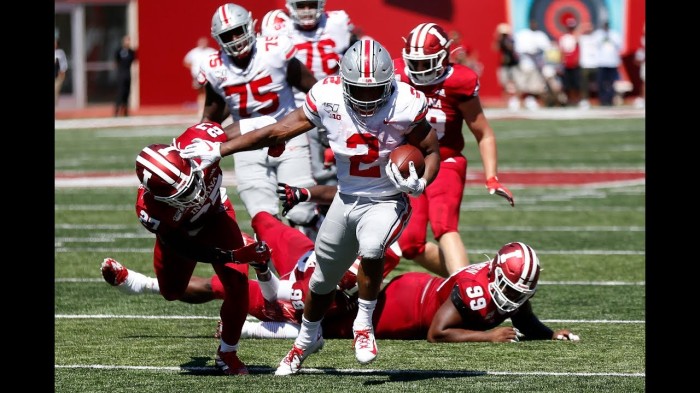 After having a productive Week 2 out of conference, this was a regrettable week for the conference as it suffered five non-conference losses and two close calls.

The Hoosiers just need to stop scheduling Ohio State this early in the season because it seems that they are never ready to face the Buckeyes. This year it was a 51-10 loss as the Hoosiers seemed out of sorts on both sides of the ball. With Michael Penix Jr. being out with an injury last year’s starter Peyton Ramsey started the game and offered little under center as he only passed for 162 yards and an interception. While quarterback play is becoming an issue, the bigger question is where is Stevie Scott III? After having a great freshman season, Scott III is encountering a sophomore slump and has only rushed for 118 yards in three games. The lack of balance offensively will make it hard for the defense as the quality of opponent remains competitive.

Just when you think the Terrapins have turned the corner and have the potential to make some noise in the conference this season, the come out and lay an egg in the 20-17 loss to the Temple Owls. Despite quarterback Josh Jackson having a terrible game (15-of-38 for 183 yards and one interception), this was a head-scratcher of a loss. Running back Anthony McFarland had a good game rushing for 132 yards and one touchdown, and the Maryland defense forced three turnovers. But it was the big plays from the Temple offense that did in Maryland as it allowed multiple plays over 25 yards including a 79-yard touchdown. Next weeks game against Penn St. is a gut check game for the Terrapins if they plan on getting out of the bottom half of the Big Ten East.

Just when MSU fans thought things were turning the corner, the Spartans come out and lay a massive egg in the 10-7 loss to the Arizona St. Sun Devils. Yes, there were some obvious bad calls late in the game, but that doesn’t excuse the poor execution of the MSU offense the other 55 minutes of the game. The offense seemed to have no problem moving the ball up and down the field as quarterback Brian Lewerke passed for 291 yards but could not get it into the end zone. Running back Elijah Collins had another productive game and found the endzone for the only MSU touchdown, but that was it. The MSU defense played well until the last drive of the game for ASU as it forgot to account for a running freshman quarterback that struggled to throw the ball all afternoon.

The OSU blitzkrieg continued this past Saturday as the Buckeyes quickly handled the Indiana Hoosiers 51-10. Quarterback Justin Field’s did not have the statistical game he had the first two weeks of the year, but that’s because he had help in the backfield. Not only did running back JK Dobbins rush for 193 yards and one touchdown, but Master Teague had the best game of his young career as he rushed for 106 yards on only 10 carries. Defensively, Chase Young (2 sacks) and cornerback Damon Arnette Jr. (96-yard interception return for a touchdown) led the way for a Buckeyes defense that had five sacks. Unless there is a significant injury, OSU has to be the prohibitive favorite to win the conference.

Nittany Lions fans will probably blame the weather, but things were a lot closer than expected in the 17-10 victory over the Pitt Panthers. Constant rain and a slick ball limited the effectiveness of quarterback Sean Clifford (222 yards, 46% completion rate) but fortunately, the rushing attack picked up the slack. Leading the way this week was sophomore running back Journey Brown with 109 yards on only 10 carries. With the offense struggling to generate scoring drives, the defense stepped up multiple times on the afternoon as six of Pitt’s eleven drives ended in punts. The bend but don’t break approach reared its head allowing 372 passing yards. Linebacker Micah Parsons led the way with nine tackles and one pass defense. Rivalries generally bring out the best in both opponents; hopefully, this low scoring affairs was more about that than Penn St. actually being exposed on both sides of the ball.

Much like Maryland, the expectations were starting to grow for the Fighting Illini, but 34-31 upset loss to the Eastern Michigan Eagles cast a large cloud of doubt over whether this team is good enough to win once conference play starts. Quarterback Brandon Peters finished the game with 297 yards and two touchdowns but the second half was full of missed opportunities as Illinois only scored on two of seven drives. Running back Reggie Corbin (18 carries, 144 yards, one touchdown) returned after missing last week’s game versus UConn and looked the part of a talented Big Ten running back. But he needs help finishing drives. Despite linebacker Dele Harding finishing the game with 17 tackles, the Fighting Illini showed that the team is still a work in progress on that side of the ball. Unless things change drastically, it will be hard to see them stopping many Big Ten offenses.

The Hawkeyes overcame multiple weather delays to defeat in-state rivals the Iowa St. Cyclones. It was a one-yard touchdown by quarterback Nate Stanley that gave Iowa its first lead of the evening, 15-14. Stanley was steady, finishing the game with 201 yards but lacked the typical help from the rushing offense as Iowa was led by Mekhi Sargent (13 carries, 58 yards.) Talented defensive end A.J. Epenesa only tallied one tackle and has to be a bigger factor once the Hawkeyes get back into conference play in two weeks.

The Gophers love playing on the edge, this time it was a close 35-32 win over the Georgia Southern Panthers. Quarterback Tanner Morgan continued his efficient season completing 61% of his passes for 289 yards and three touchdowns. Too bad the running backs aren’t having the same success. As a team Minnesota only rushed for 93 yards on a whopping 43 carries and outside of a few chunk plays, the Panthers limited Rodney Smith (11 carries, 57 yards) to another subpar game for the year. Despite facing the complex triple-option offense, the Gophers did a great job limiting Georgia Southern to only 123 yards on 33 carries. Braelen Oliver and Thomas Barber had fumble recovers for a unit that held its own. Allowing inferior competition to stick around is going to catch up to Minnesota one day. Fortunately, it wasn’t Saturday.

Led by quarterback Adrian Martinez (257 yards passing, 44 yards rushing, three total touchdowns) the Cornhuskers bounced back from a disappointing loss to dominate the Northern Illinois Huskies 44-8. The balance of the Nebraska offense was evident as running back Dedrick Mills (11 carries, 116 yards) led the way as on the ground and JD Spielman (4 receptions, 77 yards) was the primary target through the air. Despite allowing 350 yards, the Cornhuskers defense held NIU out of the endzone most of the afternoon. Tight end Austin Allen recovered a fumble on a fake punt attempt to spark the team in the first quarter.

Once it was announced that quarterback Elijah Sindelar was not playing, the chances of winning plummeted drastically for the Boilermakers in the 34-13 loss to the TCU Horned Frogs. Jack Plummer (181 yards passing, one touchdown, two interceptions) did his best to keep Purdue in the game. But with no rushing attack — 23 yards on 25 carries — the Boilermakers were destined to be fighting an uphill battle. As bad as it was for the offense, it was even worse for the Purdue defense. The Boilermakers allowed 346 yards rushing and seemed to be out of position most of the game. The lone bright spots were defensively were linebacker Ben Holt (17 tackles) and defensive end George Karlafitis (one interception.) Head coach Jeff Brohm will have to work overtime to fix the issues with the teams run defense, if not the rest of the conference will be licking its chops.

Dobbins has had to share carries most of his career at OSU, but he continues to make the most of his opportunities. Against the Hoosiers, Dobbins treated the Indiana defense like Swiss cheese. If he can keep running the ball with this level of power, it will go a long way in securing a return visit to Indianapolis for the Buckeyes.

Game of the Week

Both teams are coming off byes, and for Wisconsin, it couldn’t have come at a worse time as the team was playing at a high level. Conversely, for the Wolverines, it was just what they needed as they need to reevaluate ball security and creating better run lanes for its running backs. The time off is exactly what Michigan needed as Shea Patterson leads them to a late scoring drive to win the game.