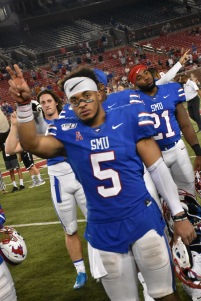 For one half at Gerald J. Ford Stadium, the SMU Mustangs were stuck in a closer-than-expected battle with the Texas St. Bobcats that was initially thought to be a gimmie game for a team coming off a big win. Fortunately for the Mustangs a true freshman used this game as his formal introduction to college football and sparked a second-half outburst in the 47-17 win.

SMU has an outstanding freshman at running back

True freshman TJ McDaniel came into this season expecting to be redshirted, but his hard work on the scout team earned him reps with the first team in practice this week. That resulted in him suiting up on Saturday, and he did not disappoint. Needing only eight carries, the South Lake Carroll high school product finished the game with 159 yards and three touchdowns. McDaniel showed patience and a burst that not seen by a player so young. McDaniel now gives head coach Sonny Dykes another option in an already talented running back rotation that includes Xavier Jones (20 carries, 108 yards, one touchdown) and Ke’Mon Freeman (14 carries, 67 yards)

Even when Shane is mortal, he’s still pretty good
For the first time this season, quarterback Shane Buechele did not pass for 300 yards, but he made enough plays with his arm to be effective when it mattered. Coming out of the half with the game still close, Buechele orchestrated a four-play touchdown drive that was highlighted by two passes to Reggie Roberson Jr. for 34 and 26 yards respectively. Fortunately for Buechele, it’s easier to learn from your mistakes — two ill-advised interceptions — when your team wins by 30 points. However, the margin for error will be diminished next week when SMU faces TCU.

The SMU defense is making strides each week

Through three games, the Mustangs have forced five turnovers, sacked the quarterback 12 times and only surrendered a 26% conversion rate on third-down. One of the leaders of that much-improved defense is safety Patrick Nelson. The senior from Chicago, IL got off to a fast start the first two games of the 2019 season with 13 tackles, one interception, and two sacks. Against Texas St, Nelson added another seven tackles and three sacks and continues to be one of the leaders on that side of the ball. Safety Rodney Clemons also had a crucial interception in the first-half when the game was still in the balance. The level of aggressiveness from this side of the ball will have to continue if the Mustangs want to have a successful 2019 season.

The Mustangs head back on the road, albeit a short bus ride down I-30, to Armon G. Carter Stadium to face the TCU Horned Frogs. Coming off a 34-13 win over the Purdue Boilermakers, TCU is looking to build more momentum before heading into conference play in the Big 12. The two-headed running back monster of Darius Anderson and Sewo Olonilua will provide a challenge for a Mustangs defense hasn’t faced many run-based teams. In last year’s 42-12 home loss, the Mustangs allowed 239 rushing yards and three touchdowns. If SMU wants to remain undefeated, that number will have to be reduced significantly.