Not since Jay-Z was trying to find out if Nas was “Ooochie-Wallie” or “One Mic” have we seen this much back and forth with one rapper. Luckily for Drake and his fans, his indecisiveness seems to not be affecting his skills as a rapper as Toronto, ON rapper took his session with hot producer Murda Beatz to Instagram Live to hint that a collab could be in the works for his next single. But while fans anxiously wait on the new music the sneaker community is buzzing on whether future performances of this hot song will be done with him wearing a Jumpman/Swoosh or three stripes.

For those who don’t know, Drake has had a longstanding relationship with Jordan Brand and has been one of the few non-athletes to have his very own signature Air Jordan retro. The October’s Very Own (OVO) line has been very popular, selling out in minutes on various sneaker websites and his own apparel website, but it has been rumored that he longed for more. Jordan Brand recognizes Drake as being a tastemaker but does he have enough influence in the sneaker world to command a bigger piece of pie at Jordan Brand — which could include more creative responsibilities with his releases and maybe even having his own exclusive sneaker? While Jordan Brand mulls over that decision German sneaker brand Adidas has stepped in like an opportunistic side-chick and has been whispering sweet nothings in the Toronto rapper’s ears that has caught his attention.

The conversations have gotten so serious that he was caught photographed wearing a pair of white Adidas Ultraboost not too long ago. For sneakerheads looking for any sign on which direction Drake was leaning this photo was enough to send everyone into a frenzy, but about an hour ago the widely-popular sneaker app @j23ap tweeted a photo of Drake courtside during the Toronto Raptors victory over the Boston Celtics wearing a pair of Nike Air Maxes.

Does this mean he has reconciled with his old boo, maybe-maybe-not? But if you’ve followed Drake and his music over the past few years, you know that he is a mastermind at capitalizing on his own buzz. Him wearing the Nike’s could be nothing more a marketing ploy to garner more attention for his upcoming single but it also could mean that he reconciled with Nike and Jordan brand and we can look forward to seeing more of this on his feet: 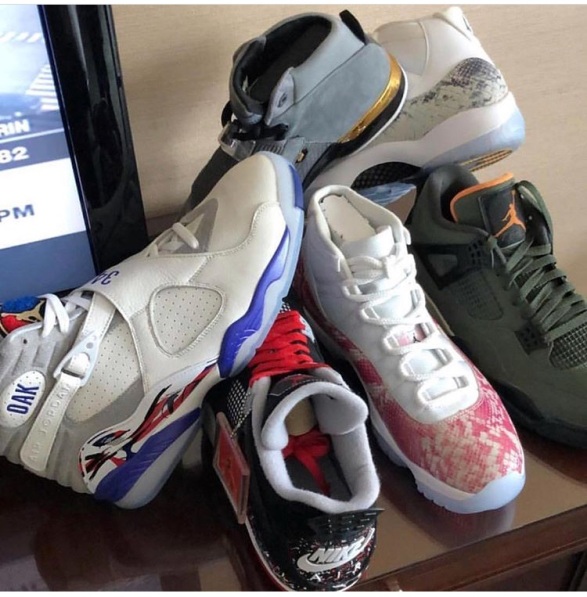