On Saturday the reigning Division 2 State Champions, Detroit Martin Luther King  Crusaders (1-0) were preparing to take on a familiar foe, the Southfield A&T Warriors (Southfield High School and Southfield Lathrup merged) (0-1) . At that point, the sky opened up and a thunderstorm overtook Wayne State University’s Adams Stadium.  After a long delay and deliberations about rescheduling the game, King opened the floodgates to crush Southfield A&T 39-0. 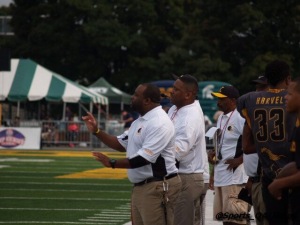 This game was billed as a game to see and the Crusaders held up their end of the bargain.  After the loss of their longtime coach Dale Harvel, who passed away suddenly this past July, people didn’t know how King would respond in their 1st game and respond they did.

The game started off as a defensive battle, as both defenses stepped up and kept the other team off the board.  At the end of the 1st quarter, the score was 0-0.

It was the beginning of the 2nd quarter that King decided that it was time to go to work. On the 2nd play of the quarter, Quarterback Dequan Finn hit Ambry Thomas for a 34-yard strike to put the Crusaders on the board 6-0. Aaron Pitts hit the extra point to put the Crusaders up 7-0.

After a fumble by the Warriors, King’s Kevin Willis rumbled 7 yards for a touchdown. The extra point was blocked and the Crusaders were up 13-0.

King did not slow down as on the next possession Thomas took a screen pass from Finn 62 yards to the Warriors 4 yard line. After being flagged for a False Start, Willis again broke free for 9 yards to put King up 19-0.

Willis, who has ended the game with 161 yards on the ground, showed his versatility as he caught a 13-yard pass from Finn to give King the 25 -0 lead. Then, he scampered the 3 yards in for the 2 point conversion to make the score 27-0. Yet, Willis’ night wasn’t over as he found pay dirt again from 4 yards out to put the Crusaders up 33-0.

The scoring was capped off by Marvin Grant, Jr. who rumbled in for a 4-yard score.  That extended King’s lead to the eventual Final Score 39-0.

2017 King Running Back Kevin Willis talks about his performance