After having to postpone their game on Saturday, due to the weather, Detroit Cass Tech (1-0) and Oak Park (0-1) lit up Wayne State University’s Adams Stadium, with the Technicians winning 45-27.

This game was truly about power. The Knights showed that the extra day may have prepared them, as they went to work on their 1st drive. Oak Park’s Najee Trinity punched it in on a 3-yard run. After connecting on the extra point by Dylan Stackhouse, the Knights were up 7-0. 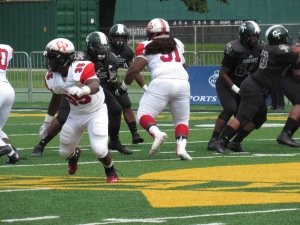 After a stalled drive by the Technicians, the defense stepped up as Donovan Williams intercepted a pass from Oak Park’s Quarterback Dwan Mathis at the Knights 35. On the ensuing drive, Quarterback Rodney Hall took the snap and snuck it in for a 1-yard touchdown. The extra point by Edwin McClendon was good and it tied the score 7-7.

At this point, the war was starting as the Knights fired back. Mathis hit Keveon Clark for an 80-yard strike, with the added extra point, Oak Park was up 14-7. And that is how the 1st quarter came to an end. 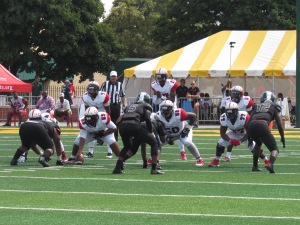 With Hall unavailable due to an apparent shoulder injury, the Technicians started the 2nd quarter with Aaron Jackson at the helm, but never missed a beat, as he found game MVP Donovan Peoples-Jones for a 37-yard touchdown. McClendon kicked the extra point and the score was tied again 14-14.

Kevin Bradley narrowly escaped a huge collision with two Technicians defenders and ran 64 yards for the touchdown as Oak Park quickly answered with a score of its own. Stackhouse connected on the extra point and the Knights were ahead again 21-14.

Cass Tech one-uped Oak Park with an even quicker score as Donovan Johnson returned the ensuing kickoff 83 yards to bring the score once again even at 21.

The Technicians took control of the game as Hall returned and was able to find Jaren Mangham open in the end zone for an 11-yard touchdown pass for the 28-21 lead. 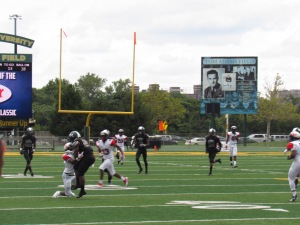 With time winding down in the half, McClendon connected on a 27-yard field goal to put the Technicians up 31-21 at the half.

Oak Park started to show a little more fight as Cashual Goldsmith found a hole and scored on a six-yard run. Stackhouse missed the extra point to keep the deficit at 31-27 — it would be the last time the Knights would see the end zone on the night.

Cass opened the final quarter with another score as Jackson connected with Pope-Jones on a 58-yard bomb. With the extra-point, the Technicians extended its lead to 38-27, and Mangham later rumbled 14 yards to make the final score 45-27 for Cass.

Cass next plays host to Edison Academy and Oak Park will travel to Groves High School. 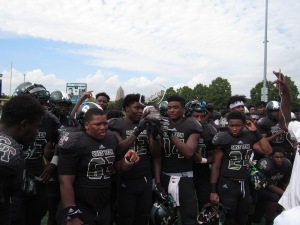