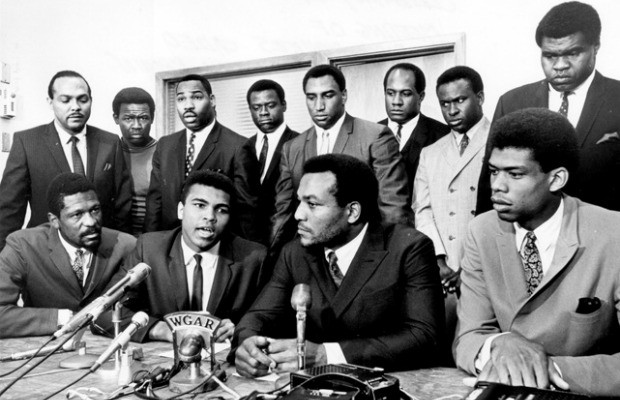 As the world continues to reflect on the contributions of one of its greatest athletes, Muhammad Ali, there are some still wondering if there are any current day athletes worthy of taking up that mantle as the next modern day sports activist?

Before you can determine if any current-day professional athlete is worthy of the weighty title, let’s dissect what the term activist means.

According to the Merriam-Webster dictionary, an activist is someone who campaigns for some type of social change.

Unfortunately, that definition is broad and leaves room for interpretation which leads to intense discussions on social media.

Someone created a list of his top sports activist and it included Kareem Abdul-Jabbar, Jim Brown, Dikembe Mutombo, Muhammad Ali, and LeBron James (we’re not even going to discuss the omission of greats like Roberto Clemente, Jackie Robinson, and Arthur Ashe.)

The group took no issue with the first four names but it was the inclusion of James in that exclusive group that ruffled the feathers of many.The author’s justification for including James was that he was the catalyst for the Miami Heat wearing the hoodies in the wake of the Trayvon Martin killing and also referenced the monetary donations that the Akron, OH native has made to many causes in not only his home state but abroad.

That’s good and all, but do those good deeds make him an activist or more of a Philanthropist?

Goodwill is the key word people!

While the context of the two words tends to intertwine, the great difference is the raison d’etre.

The promotion of human welfare doesn’t receive opposition because it tends to benefit everyone and is gift-wrapped with a pretty bow or a nice envelope.The hard push for social change goes against the status quo and is challenged. This resistance is so rigid that it often results in the instigator sacrificing something —  be it time, money, or influence.

How many of today’s NBA players are willing to risk what they have to champion a cause that might not benefit them directly?

Unlike the black athletes of the 50’s, 60’s, and even 70’s, today’s African American athlete has been sheltered so much that he cannot relate to the injustices that many of their black fans are exposed to.

Take what happened with Atlanta Hawks guard Thabo Sefolosha; The 11-year vet suffered a broken leg after being assaulted by NYC police outside of a club in 2015 and was forced to miss the entire post-season.
No one spoke out on his behalf to condemn the excessive forced used by law enforcement officials — not the NBA, not his peers, and not even the Hawks organization that he works for. If they won’t stand up for one of their own, why are we expecting them to speak out on what’s going on in the hood?

Is the silence due to apathy or is the league unwilling to challenge corrupt law enforcement system for a role player? Unfortunately, if the players were to speak out the league stands the most to lose… and we know they can’t have that happen.

Didn’t players speak out against racist owner Donald Sterling, which led to him selling the team?

Sure, but who did that benefit – the players or the league?

By allowing the players to lead the outrage, the NBA created an ideology within the fans that its players care(d) about things that matter, which they do, but if Sterling didn’t have a history of being a bigot, slumlord, and racist would he had been forced to sell the Los Angeles Clippers by the league?

If you naively say yes, then explain the lack of action by the league after Hawks GM Danny Ferry’s “little African in him” comment made towards then free agent Luol Deng.

Here’s the conundrum NBA players face with the injustices of the world; is it only ok to have a voice as long as it echoes the sentiment of the league? If so, does it even benefit them to speak out if fans and the media will question their sincerity?

Now this isn’t to say that athletes never say anything, it just normally doesn’t happen until AFTER they hang up their sneakers.

Recently Stephen Jackson, known more for his involvement in the infamous “Malice at the Palace”  while a member of the Indiana Pacers, made sure to check someone in his gym that called Serena Williams a gorilla. It may not seem like much but more athletes need to be courageous enough to call out the b.s. of the world.

Growing old tends to dissolve your filter and it seems as if players get more vocal on societal issues once those retirement papers are signed.

It’s just unfortunate that we have to wait until the player is out from under the tyranny of league expectations and corporate obligations for them to walk in their truth because there are some who would like to see them fight the power while still having a global voice.

Maybe the passing of a legend who was unapologetic about his world views will stir the fire within enough athletes, not just NBA players, to begin to use his/her stardom as a vehicle for social change.

Then again, can one expect from others what they aren’t doing themselves?

We as fans and journalist may not have the attention of thousands but we can still lend our voice to the conversation calling for change.
So before you ride out on LeBron, Steph, or even Kevin Durant for not picking up the activist mantle, ask yourself “what are you doing to become one yourself?”

One thought on “The Next Great Sports Activist… Is there anyone qualified?”