“Haters are my motivators”

While it’s hard for the Michigan State Spartans football team to use that underdog attitude within its own conference — outside of maybe local media still trying to push the other team in the state above them — it’s safe to say that those that cover college football nationally are still sleeping on MSU.

Even after picking them to begin the season, Stephen A. Smith did not think that the Spartans stood a chance against the Crimson Tide. 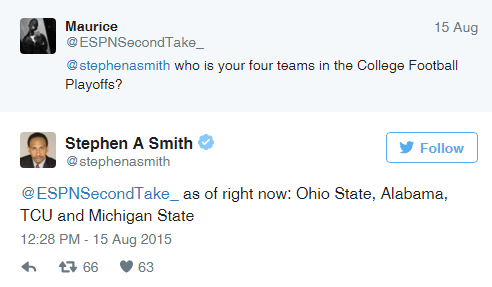 But it’s not just the analyst and experts that aren’t giving the Spartans a chance against the all-powerful Crimson Tide. Right now, according to the Las Vegas sports book, the Spartans are a 9.5-point underdog.

What they are basing that off of? Despite defeating Florida comfortably in the SEC Championship game two weeks ago, it still was against a Gators team that only had 180 total yards, 15 rushing yards as a team, and scored its only touchdown on a punt return.

It’s not that bookies feel that Alabama’s offense is good enough to outscore MSU by almost 10 points, maybe they don’t think that MSU offense will be able to score enough against the vaunted Alabama defense to get within that point spread.

And that my friend couldn’t be any further from the truth.

Thanks to great coaching, MSU’s offense is potent enough to score when needed — ask Penn St. about giving up 52 points and over 400 yards of offense — but it can also win a grind-it-out dogfight as well. The 22-play drive against Iowa in the Big Ten Championship with a thing of football beauty. There aren’t many NFL teams that could have orchestrated a drive that long — maybe the Detroit Lions head coach Jim Caldwell needs to take a page out of Coach Dantonio’s playbook on how to close out a game.  Seeing a college team execute a drive running the ball effectively while mixing in timely passing shows that the Spartans offense is more dangerous than outsiders realize.

But there are some that still believe that despite having one of the most prolific quarterbacks in college football history in Connor Cook, an 80-catch receiver in Aaron Burbridge, and a collection of running backs that most conferences would love to have that the Spartans have no chance in this semi-final match-up against the SEC powerhouse.

For many MSU fans and alumni, that’s ok. They are used to being doubted. They are used to hearing detractors say that the program couldn’t possibly maintain this momentum after the graduation of Kirk Cousins, Le’Veon Bell, Jeremy Langford and many other Spartan Dawgs of yesteryear. But the program has and it’s time that everyone that follows college football recognizes them for being the top program in the Big Ten and a top-5 elite football program nationally.

Unlike with other premier programs like Florida State, USC, Ohio State, and Alabama experts tend to focus on what the other team did do and not give the Spartans credit for earning the victory.

Everyone talked about how it was Urban Meyer’s decision not to run Ezekiel Elliot more that stymied the Buckeyes offense which led to the 17-14 defeat, not the fact that the MSU defense dictated the tempo the entire game and forced Urban the Great into his worst offensive output as a head coach.

So while many are asking how MSU will be able to score against Alabama’s defense, the true question needs to be how will Alabama be able to score against Michigan State’s defense. Despite the surprising passing performance in the SEC Championship, we all know that strength of the Crimson Tide offense is it’s Heisman Trophy winner Derrick Henry and the Alabama rush offense.

Before anyone yells Roll Tide too quickly in regards to that in-game match-up, they better ask Iowa how difficult it was to run against that MSU front seven. Prior to the Big Ten Championship game, the Iowa Hawkeyes were averaging 203 yards per game as a team, but against Michigan State, they were limited to 52 yards on 24 carries. And if you pay close attention to the style of play, Iowa is close enough to Alabama in how they focus on the run game to set up the average passing game that the Spartans may have an advantage by playing a team that mirrors the coaching philosophies of its next opponent

So while you would have thought that Spartan Nation would have long since put down that boulder-sized chip that it has carried through the years of being called little brother and considered an afterthought in the pecking order of college football powers, it may be time to hold onto it just a little bit longer because doubting MSU’s ability to pull off this upset could be the very thing that leads the team to its first national championship since 1966