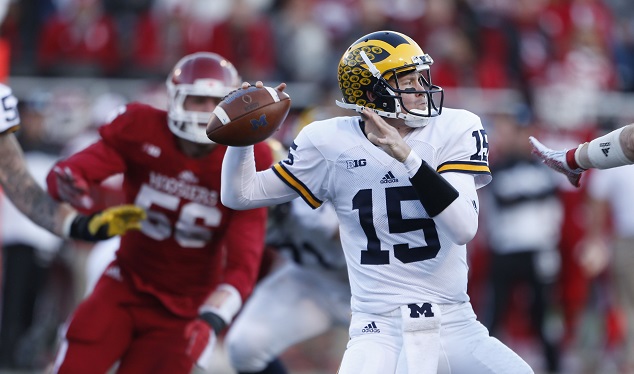 The games in Week 11 of the Big Ten conference play pretty much went status quo, outside of Iowa and Michigan being pushed to the brink of upset by two reeling programs. As we reach the finish line of the regular season there still are opportunities left for teams to ruin the playoff hopes of some while rekindling the dreams for others.

17 consecutive run plays and the Hoosiers decide to get cute on fourth down in the double OT loss to Michigan 48-41. Jordan Howard went straight beastmode as he rushed for 238 yards on a Michigan defense that was only allowing around 80 yards per game, but on the critical fourth down play they decided against giving him the ball and left it up to the duo of Nate Sudfeld and Mitchell Paige to try to tie the game. Unfortunately the pass was broken up and the season of frustration continued for an Indiana team that more talented than the record shows.

Talking about Maryland is starting to become redundant. In the 24-7 loss to Michigan State the defense plays well enough — the Terrapins limited MSU to only 262 yards and forced two turnovers. The rush offense is virtually ignored — Wes Brown only gets 12 carries despite averaging 4.3 yards per carry. And turnovers continue to be contagious — The quartet of Perry HIlls, Caleb Rowe, Brown and Brandon Ross had five turnovers between them, including two more interceptions for Rowe as Maryland leads the nation in turnovers and its not even close. Whoever beceomes the next Maryland coach will have to fix this issue ASAP or the Terrapins will never reach its full potential in the conference.

Was it a loss hangover or a matter of overlooking a bad Maryland team? Whatever it was, the Spartans had its worse offensive output of the season in the 24-7 win. The offense accumulated only 262 yards and had three turnovers. Lucky for them the team was facing a Terrapins team that loves giving the ball away and MSU was able to force five turnovers of its on. Connor Cook had a poor performance and only passed for 77 yards on 6-of-20 attempts and the day got worse when he injured his shoulder. Linebacker Riley Bullough’s 44-yard interception return kept the momentum in MSU favor in the second quarter when it looked like Maryland could possibly be gaining confidence to pull off the upset.

For most of the season its been the defense carrying a lagging offense, but in the 48-41 win over Indiana it was the offense that saved an uncharacteristically bad Michigan rush defense. Jake Rudock, who has been coming on like gangbusters of late, had a career day in passing for 440 yards and six touchdowns and finally is looking like a legitimate quarterback for the Wolverines. Joining him on the “game of his life” platform was receiver Jehu Chesson who tied a Michigan record with four receiving touchdowns and finished with 207 receiving yards on 10 catches. However, the lack of a pass rush and the inability to stop the run has to be concerning for Michigan fans when you consider they face two of the top running backs in the conference over the final two weeks.

Well for those who thought the offensive struggles would improve with JT Barrett returned, we were wrong. Even though the Buckeyes won 28-3 over Illinois, the passing game continued to struggle as Barrett only had 150 yards and was intercepted. If OSU is going to win its final two games and make it to the Big Ten Championship it will be because the team fed running back Ezekiel Elliott continuously. The junior rushed for 181 yards and continues to be the best offensive option on the team.

Hey… at least they didn’t allow 40 points. In a season mired with injuries and issues off the field you have to find silver linings and points allowed and turnovers were the highlights in the 31-14 loss to Nebraska. In addition to limiting an opponent to under 40 points for the first time in four games, the Scarlet Knights defense forced three interceptions. Too bad the offense gave it away two times itself and struggled to generate any type of offense. Star receiver Leonte Carroo made his return and had 62 yards on four catches, but because of the constant Nebraska pressure quarterback (six sacks), Chris Laviano didn’t have enough time to find him more.

Illinois couldn’t take advantage of early opportunities and it cost them in the 28-3 loss to Ohio State. The Illinois defense had the daunting task of stopping the high-powered OSU offense and in the first half did a good job as it forced three punts, a fumble, and saw OSU miss a field goal in the first half. Unfortunately, the offense could not capitalize as it was able to only score on one of six possessions in the first half, while punting on the other five. Statistically Wes Lunt, 23-of-47 for 241 yards, played well enough to keep the team in the game but the lack of production from the rush offense — 20 yards on 25 carries — doomed the team. After having combined for 313 yards against Purdue, running backs Ke’Shawn Vaughn and Josh Ferguson only mustered 45 yards on 18 carries against the Buckeyes.

Where are the Hawkeyes getting these running backs from? First it was Jordan Canzeri, then it was Akrum Wadley, and in the 40-35 win over Minnesota LeShun Daniels Jr. showed how talented he is as a runner by rushing for 195 yards on 26 carries. There are teams struggling to find one talented back, and the Hawkeyes have three that they can rely on and despite what national media may think, this team is a legit national champion contender. CJ Beathard completed 69% of his passes for 213 yards and ran for 50 yards and two touchdowns in the close victory. And who said the new Kirk Ferentz offense wouldnt work in the Big Ten?

The roles reversed this week as the Gophers offense did all it could in the 40-35 loss to Iowa but got little help from its defense. Mitch Leidner passed for 259 yards and had a touchdown while running back Shannon Brooks pulled double-duty as he ran for 86 yards and also had a 42-yard touchdown pass to Drew Wolitarsky. Too bad the Minnesota defense surrendered 506 total yards, allowed Iowa to convert 66% of its third-down conversions, and couldnt keep the Hawkeyes out of the endzone on a late fourth quarter drive that sealed the victory.

They didnt score 40+ points and they turned the ball over three times, but in the end they got the victory 31-14 and that’s all that matters for a Nebraska team that is looking to get bowl eligible after what many considered a disappointing season. Tommy Armstrong Jr must have left all his mojo on the field against MSU as he had a less than stellar game, 188 yards passing and three interceptions, against the Scarlet Knights. Running Back Imani Cross did provide some balance to the offense with 90 yards on 20 carries and Cethan Carter gave the team a much-needed boost with a 32-yard touchdown run to start the scoring. Greg McMullen had two sacks and three tackles for loss and help lead a Cornhuskers defense that has been trying to regain the Blackshirt nickname all year. They don’t have it back yet, but Saturday was a start.

Whew…thats all most Northwestern fans can say after escaping with the close 21-14 victory over Purdue. Simply put the offense, outside of Justin Jackson and Warren Long, gave the team nothing. Clayton Thorson played another one of his “you look like a freshman” games as he only passed for 82 yards and was intercepted once. Backup Zach Oliver didn’t fare much better as he only accounted for 50 yards passing and had a turnover himself. Fortunately for that side of the ball the defense kept the Boilermakers out of the endzone when it mattered and forced four consecutive punting situations. All of your games can’t be visual masterpieces and as long as you WIN ugly it shouldn’t matter

The Boilermakers missed an opportunity to pull off another upset in the 21-14 loss as it could not generate the offense needed to get the win. Even with having only one turnover the offense was stagnant outside of the 68-yard touchdown pass from David Blough to Dominique Young, which is unfortunate because Blough played good enough (287 yards) to win. Led by interceptions from Frankie Williams and Brandon Roberts, the Purdue defense carried its share of the load, but in the end football is a team sport and when you end the game with four consecutive punts, there’s not much you can do.

Jake Rudock: quarterback Michigan: As much grief as I’ve given Rudock over the season, its time to give him high praise. Without him there is no way Michigan is even in the game against Indiana. His growth in the pocket and being able to see the field has improved tremendously, and while he may never be called a burner his willingness to pick the right spots to run makes him a dual threat option.

This game could determine who wins the Big Ten East and showcases the two most dominant teams over the past couple of season in the conference. Ironically both teams have struggled to live up to the full expectations going into the year and have looked lackluster at times to put it nicely. The hopes of this game being an undefeated matchup were dashed when MSU was upset by Nebraska two weeks ago, but it still will be a dogfight. You have to ask yourself which team’s offense will step up the most and looking at the issues still plaguing the Spartans — lingering injuries, inconsistency at running back — I have to give the edge to the Buckeyes who have an ace in the hole with Ezekiel Elliott. If MSU can play ball control to limit his touches and force JT Barrett into at least turnovers, the Spartans have a chance… Unfortunately I dont see that happening. OSU 38 MSU 27