In a first round playoff matchup that could have been a city championship a few decades ago; it had that type of feel to it.  The game got off to a fast start with U-D Jesuit capitalizing on a fumble on the opening kickoff and went up 7-0 before most Crusader fans could find their seats.  It didn’t take King long to answer the call when Lavert Hill took the kickoff back to the house with an inspired run to tie the game at 7.  King forced a fumble but gave it right back as Scott Nelson intercepted the ball and scored to put the Cubs ahead 14-7.  The King offense drove back down the field and Martell Pettaway busted through the line and tied the game at 14.  King’s kickoff was mishandled and recovered by the Crusaders making a total of four turnovers in the 1st quarter.  Didn’t take long at all for King to capitalize as Armani Posey connected with Lawrence Bryant to go ahead by a touchdown, 21-14.  The action finally slowed down until the Cubs added a 32 yard FG by David Anton to cut King’s lead to 21-17 which remained the score at the half. 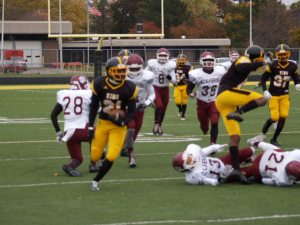 Lavert Hill with the kickoff return for a TD

Scott Nelson with the Pick 6 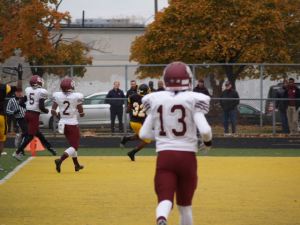 Martell Pettaway with a rushing TD

Lawrence Bryant with the receiving TD in 1st quarter

Donnie Corley goes up for a great catch 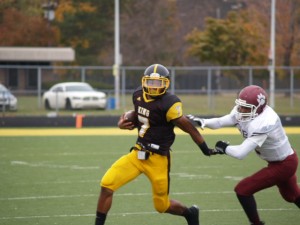 Scott Nelson with the reception

A great opening drive by the Cubs was capped by a QB keeper by Nelson in a 4 WR set to put his team ahead early in the second half 24-21. Later in the third quarter, Posey hit Donnie Corley for a score and the Crusaders went up 28-24.  The Cubs had their next drive stalled and King finally was able to go up by two scores and clinched the game with another TD Pettaway.  This game was as entertaining as they come and a reminder to those still in the tournament the only #1 that matters is at the end of the season 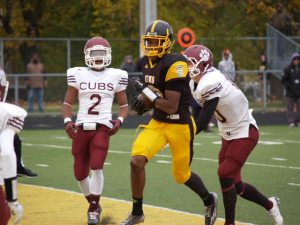 Donnie Corley with the TD catch 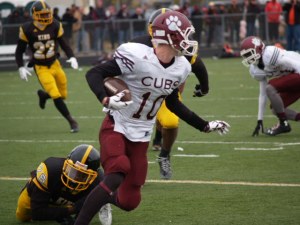 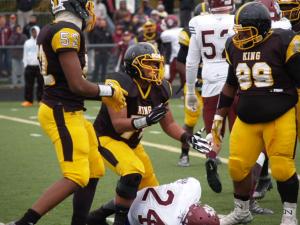 Coach Spencer talks about his defense’s play during the victory.