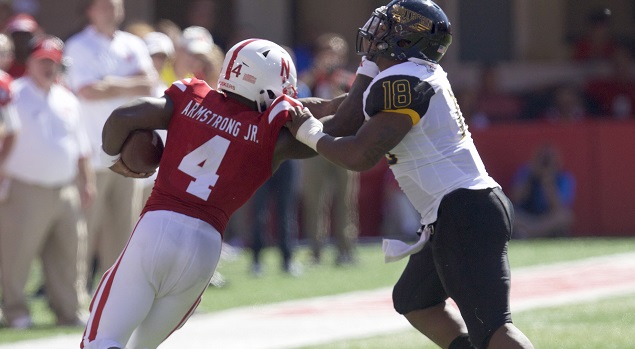 The last week of non-conference play was an opportunity for some teams to show that they actually may be legitimate (Michigan, Penn St), and other to show that there still was a lot of work that needed to be done for them to even be considered decent (Maryland, Purdue.)  Either way, conference play this week will really separate the pretenders from the contenders.

Nothing spectacular in the 24-17 win over Wake Forest, but these are the type of games the Hoosiers must win if they want to get back to a bowl game — let alone be a major player in the conference. Running back Jordan Howard had another very productive game with 168 yards and one touchdown. Still not sold on the defense but they did have one interception while limiting the Demon Deacons offense to 4-of-18 third down conversions.

There is a turnstile at the quarterback position with the Terrapins and that’s not a good thing. Former Oklahoma St. transfer Daxx Garman replaced Caleb Rowe after he had four interceptions in the 45-6 blowout loss to West Virginia, and unfortunately he didn’t fare much better throwing one himself. I still cannot understand why Coach Edsell doesn’t hitch his offensive wagon to running back Brandon Ross, who had another good game finishing the day with 130 yards on 15 carries — which is impressive considering the lopsided score.

It was a 30-10 win for the Spartans over Central Michigan, but it seemed as if the team was sleepwalking all day. They were outgained by the Chippewas 340-324, but good teams find ways to win games they don’t deserve to, and this was one of those for MSU. The rush offense was productive as a unit (181 yards) and was led by Madre London’s 73 yards and Gerald Holmes two touchdowns on four carries. Star defensive end Shilique Calhoun earned extra time in the cold bath this week after his 2.5 sack and block field goal performance that led the defense.

Now this I did not see coming. There had been steady weekly improvements by the Wolverines, but the 31-0 shutout of the No. 22 ranked BYU Cougars was very unexpected. De’Veon Smith led the way with 125 yards on 16 carries and Jake Rudock, 14-of-25 194 yards and three total touchdowns, finally had a game without a turnover. Even without starting defensive tackle Brian Mone this season, the defensive tackle rotation led by Ryan Glasgow and Maurice Hurst Jr. continued its great ply this season by limiting BYU to 50 rushing yards and only 105 total yards.

Even after defeating Western Michigan 38-12 and passing for 288 yards and two touchdowns, there still are some who wonder if Cardale Jones is the answer at quarterback at OSU. After only completing 6-of-14 passes in the second half, Jones was pulled in favor of J.T. Barrett who ended up throwing an interception on his first series. Simple solution for the Buckeyes offense: GIVE EZEKIEL ELLIOTT THE BALL!!! Even with the uncertainty at quarterback Elliot had a productive game with 125 yards and a 7.8 ypc average.

Finally a good performance out of Christian Hackenberg. The beleaguered junior passed for 296 yards and three touchdowns in the Nittany Lions 37-21 win over San Diego St. I can’t get too excited as SDSU is not good, but good teams dominate bad teams like this. Saeed Blacknall was the primary benefactor from Hackenberg’s great performance as he caught four balls for 101 yards. The defensive tackle duo of Anthony Zettel and Austin Johnson both had fumble recoveries as well — Johnson returned his 71 yards for a touchdown.

When you are struggling with your passing game, the best way to fix it is to run the ball and that’s what Rutgers did in the 27-14 victory over Kansas. Josh Hicks (21 carries 113 yards) and Robert Martin (17 carries 102 yards) led the way to 312 yard team rush performance for the Scarlet Knights who took advantage of a very bad KU program. No coach, six fewer players on the roster and not having their defensive captain inspired RU to the victory — but can they keep it up in conference play?

Coming off the disappointing road loss to North Carolina, Illinois almost let another one get away as they squeaked past Middle Tennessee St. 27-25. Geronimo Allison was the offensive star with 10 catches for 128 yards but it was 51 yard field goal by Taylor Zalewski that ultimately gave the Illini the lead for good late in the fourth quarter. Clayton Fejedelem recovered a block punt in the end zone in the second quarter which gave Illinois the 14-3 lead and kept spirits high.

The Hawkeyes made quick work of North Texas in the 63-16 victory Saturday as it was 28-3 with over 10 minutes remaining in the second quarter. Jordan Canzeri had 115 rushing yards and a career high four touchdowns. C.J. Beathard was uber-efficient as he completed 18-0f-21 passes for 278 yards. Could this be the needed wake up call for the Hawkeyes to make them legitimate Big Ten West contenders… we shall see

Mitch Leidner may have had a career game with 288 passing yards with 22 completions, but the 27-24 victory over Ohio is still cutting it too close for a program that was thought to be able to challenge Wisconsin for Big Ten West division dominance. I’m not sure that even with the good statistical performance that Leidner’s detractors will quiet down. Rodney Brooks used a 40 yard touchdown run to spark a 94 yard performance — too bad he only averaged 3.6 ypc on the other 15 carries.

The Cornhuskers like things difficult. After two heartbreaking defeats, Nebraska had to hold on against a pesky Southern Miss team in the 36-28 victory. Even in this game Nebraska was outscored 21-7 in the fourth quarter, but Tommy Armstrong Jr. did all he could to ensure victory this time with a 16 yard run to give the team a comfortable cushion in the final quarter. Armstrong Jr. finished with 431 total yards and three touchdowns. His favorite receiver Jordan Westerkamp finished with 11 catches and 118 yards. And still no “black-shirt” sightings on the defense.

Northwestern used a 17 point third quarter to thwart an upset attempt by Ball State in the 24-19 win Saturday. Even though the Wildcats had 546 total yards it seemed as if they could never fully take advantage of the domination in the stat sheet. A pair of 60 yard plays — a Justin Jackson 66 yard run and 60 yard reception by Dan Vitale — show the big play capabilities of the Northwestern offense, they just need to get in the endzone more.

I guess Bowling Green was not intimidated by the neon-green highlighted uniforms Purdue rolled out as it upset another Big 10 opponent 35-28. Outside of the hideous uniforms the Boilermakers couldnt capitalize on opportunities — two missed field goals — and could not stop BGSU QB Matt Johnson, who passed for 402 yards. First time starter David Blough did his best to match that performance with 340 yards of his own, but the Purdue defense let the offense down as it surrendered 39 first downs and over 500 total yards.

Another week, another steady win as the Badgers coasted to a 28-0 win over Hawaii. This is the second shut out in three weeks for the Wisconsin defense that has stepped up to the challenge of being the better unit of the two. Offensively it’s not that they aren’t doing good things — Taiwan Deal rushed for 147 yards and two touchdowns — it’s just the defense is making life easier. You have to wonder though, is it the quality of opponents or is this unit that good?

Tommy Armstrong Jr. quarterback Nebraska: After two heartbreaking losses, Armstrong Jr. showed a bounce-back mentality with a great performance against Southern Miss. Being a duel-threat option gives the Cornhusker offense the flexibility needed to make it hard for opposing defenses to gameplan against him — that’s if he can limit turnovers.

Iowa vs. Wisconsin: What better way to kick off the Big Ten conference play than a key match-up between two West Division contenders. The Hawkeyes have an opportunity to snatch momentum early in conference play if C.J. Beathard can continue his good quarterback play. In the absence of Cory Clement the Badgers offense has been ok, but if he can return for this game, it will give Wisconsin a bigger weapon out of the backfield. Because its hard to win on the road in any conference I have to give the edge to the Badgers. Wisconsin 31 Iowa 20