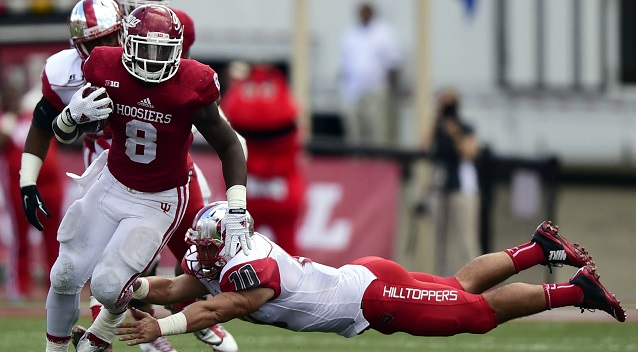 This was a week that a lot of teams in the conference hit the snooze button, fortunately for most of them they were still able to sleep walk to victory; unfortunately for Purdue, Illinois and Rutgers those teams woke up to the realization that the butt whooping they dreamt about was a nightmare come true.

When Jordan Howard transferred from UAB, Christmas came early for the Hoosiers as the talented back has made the most of his time in Bloomington. In the 38-35 victory over Western Kentucky Howard rushed for 203 yards and perhaps the conference best back — even with the likes of Ezekiel Elliott and Cory Clement garnering more attention in the preseason.

Maryland still turned the ball over three times, but it seems as if they may have solved their QB issues as newly inserted starter Caleb Rowe passed for 297 yards and four touchdowns in the 35-17 win over the University of South Florida. The Terrapins rush defense must improve — 240 yards allowed — if they want to may any noise in conference play.

Another efficient win for the now No. 2 ranked Spartans. The box score from the 35-17 win over the Air Force Academy may not be pretty, but that’s what teams that run the triple-option tend to do to you. Connor Cook was steady with 247 yards on 15-of-23 attempts and Aaron Burbridge had another good game at receiver with eight catches for 156 yards.

For a team that struggled to get victories over the past three seasons its hard not to just want to appreciate the 28-7 victory over UNLV and not be too critical. The team finally had big plays over 30 yards — including a 76 yard run by Ty Isaac, who finished with 114 yards rushing — but another suspect passing performance from Jake Rudock still won’t let me get overly excited about the Wolverines just yet.

I guess I was a week early with the “let down” expectations as the Buckeyes were in a dogfight in the 20-13 victory over Northern Illinois. The passing game was so anemic that starter Cardele Jones was pulled for J.T. Barrett who did not fare much better — so now we must ask… does head coach Urban Meyer have a quarterback controversy on his hands in Columbus? If not for a 41 yard interception return for a touchdown by linebacker Darron Lee, we could be talking about how OSU needs to rebound from a colossal upset.

I guess PSU will sink or swim based on the success of its run game, as quarterback Christian Hackenberg (10-of-19 141 yards one interception) just refuses to play up to his potential. Fortunately in the 28-3 win over Rutgers, the running game was ready to carry the load as both Akeel Lynch (10 carries 120 yards) and super freshman Saquon Barkley (21 carries 195 yards) had monster games. The question now becomes can PSU head coach James Franklin rely on Hackenberg once better teams start putting multiple guys in the box to stop the run… that remains to be seen

No offense, big problem for a Scarlet Knights offense that was limited to 294 total yards and three turnovers in the 28-3 loss to Penn St.. Junior receiver Carlton Agudosi (six receptions 80 yards) was the lone bright spot in a complete abysmal team performance for Rutgers. I’ll blame the ineptitude in this loss on the absence of head coach Kyle Flood, who is serving a three game suspension due to inappropriate non-football related actions.

The Illini traveled to North Carolina with an opportunity to get a quality non-conference win, but unfortunately left its offense in Champagne, IL as the UNC defense dominated Illinois 48-14. You know its bad when your leading rusher, Josh Ferguson (133 yards on 22 carries), had almost as many rush yards as quarterback Wes Lunt had pass yards (140 yards on 15-of-32 attempts.) The Illinois defense didn’t help much either as it allowed two 100 yard rushers in Elijah Hood and quarterback Marquise Williams.

Its better to be lucky than to be good as the Hawkeyes used a second chance field goal attempt to get past Pitt 27-24. Iowa initially missed a field goal but Pitt coach Patt Narduzzi called a time out and Marshall Koehn made the subsequent attempt to get the victory. The Hawkeye defense limited Pitt to only 282 yards and Desmond King had two interceptions.

A two-week hangover for Minnesota… remind me not to drink what they are having in Minneapolis as the Golden Gophers struggled another week in a 10-7 squeaker over Kent St. Three turnovers, 288 total yards and 13 first-downs is nothing to write home about but in the end quarterback Mitch Leidner connected KJ Maye to score the only Gophers touchdown. Minnesota has a game against another MAC opponent to sober up on before opening Big 10 play against Northwestern.

The Cornhuskers found another way to give away a game, this time an ill-advised pass from quarterback Tommy Armstrong Jr. that was intercepted on the first drive of overtime that led to the 36-33 loss to the Miami Hurricanes. Down 33-10, Armstrong Jr (309 yards and four touchdowns) led three consecutive scoring drives to tie the game, but it was his costly turnover that killed the opportunity for Nebraska to have one of the greatest comebacks in recent history.

Outside of a 55 yard run by running back Warren Long, the Northwestern offense never got things really going against Duke, but a 98 yard kick off return by Solomon Vault and a stout defense led to the 19-10 victory over the Blue Devils. Clayton Thorson looked like a freshman in his first road game of the season as he only completed 40% of his passes and had two turnovers, but the team showed enough grit to get the win.

After tying the game at 17 right before halftime, the Boilermakers must have forgotten that football was a game of 60 minutes and not 28 as Virginia Tech ran off 27 consecutive points on the way to a 51-24 blowout. Markell Jones (six carries 90 yards) was the only Purdue player that seemed ready to play as he scored the teams only points in the second half with a 60 yard run, but looking at the amount of carries he had, the offensive coordinator failed to utilize him as a weapon more.

Still playing without starting running back Cory Clement the Badgers had a balanced attack in the 28-3 victory over Troy. Three Wisconsin players had at least 40 yards rushing — including Tanner McEvoy who also had four tackles to go along with his 32 yard touchdown run — and Joel Stave was efficient with 202 yards and only four incomplete passes in 17 attempts. Perhaps the most interesting thing in the game was the almost nine minute delay due to a fire alarm going off in the stadiums main kitchen area.

Jordan Howard running back Indiana– It’s surprising to see someone so talented end up at a program with a history of being so bad, but Howard is making the most of his opportunity in Bloomington. This past weekends 203 yard performance shows why he could a strong candidate for a lot of conference post-season awards if the pace continues.

This is an opportunity for Michigan and head coach Jim Harbaugh to show the growth of the program as they host a talented No. 22 ranked BYU Cougars team that has already beat one Big Ten with a Week 1 victory over Nebraska. Despite being a 4.5 favorite according to Vegas, the Wolverines are a team with a lot to prove. Can Jake Rudock have a game where he doesn’t miss open receivers or has a bad interception? Can the Wolverine defensive backs handle the diverse Cougar receivers? Can the offense build upon the big plays against UNLV to make scoring easier? The first question is the most important and unfortunately it wont happen — at least not this week — as Michigan loses a tough one. BYU 24 Michigan 17