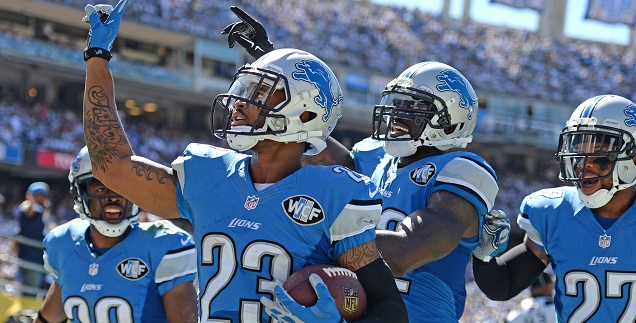 After a tough 33-28 loss to the San Diego Chargers a faction of the Lions fan base is bellowing a familiar tune, “Same Ol’ Lions”. Depending on the age of the fan that, the decibel level of that cry could be heard as far back as the ’57 squad.  Before they go into a full-blown 8-part harmony chorus, let’s look at 5 things that were learned that could change the tune of that song going into week 2.

Joe Lombardi has the potential of being an excellent Offensive Coordinator, bug only if he can make better adjustments based upon what the opposing team shows him.  His first 20 scripted plays are usually productive based upon what the film has shown him, but after that…not so much. He may have to move to the booth to see things more clearly. At this point his window is closing based on his inconsistency, but he can blow the doors off by staying aggressive and opportunistic after the half.

Injuries are never an excuse for being ineffective. If that was the case then the San Diego Chargers surely could not have won the game after losing two offensive linemen during the game. The entire right side of the line was replaced for the Lions due to injuries in the preseason so they have yet to play as a unit.  San Diego may have given the entire league the game plan to beat the Lions with the fake and delayed blitzes, because the entire line looked more like the Three Stooges than any group of professionals paid to protect anyone.  The offensive line needs to do some team-building activities soon in order for this season to have a chance to be a success. It would be great to see the best five linemen out that, but that is never a given in the NFL.

3. The playmakers need to have the ball in their hands

The best players on the team are the best players for a reason.  Opening up the offense shouldn’t mean become an equal opportunity system where everyone gets the ball the same amount of times. Share and share alike works great in preschool and horribly in the NFL. Fans understand the goal of making Eric Ebron a bigger part of the offensive production, but at what cost? Arguably, best WR duo in the league got just about as many looks Sunday as a slab of ribs would at a pescatarian festival. Ameer Abdullah got the most targets(11) combined running and receiving.  Seven different Lions had receptions for a total of 246 yards with a good portion coming after the game was already at hand. The balance of the season will be determined based upon how often the top offensive weapons can get the ball and do what they do best.

4. The defense needs to make big plays in the big moments

The one thing most Lions fans were worried about in the preseason was the pass rush and that was the least of their issues.  As a matter of fact the rush was the reason for the halftime adjustments by San Diego that led to the comeback. The defense could not make the key 3rd down stops when they needed to and by the beginning of the 4th quarter they were noticeably gassed. The inability to get to Philip Rivers exposed the secondary, especially when the Chargers were using crossing routes to Keenan Allen against the zone.  The team has huge shoes to fill based upon last season’s production, but they definitely can become a stout unit that forces punts versus extra point attempts.

5. Matt Stafford has to be Matthew Stafford

That statement may be confusing, but the explanation is not as complex. Matthew Stafford has the tools and can make every throw needed while Matt Stafford is disconnected from his wide receivers. This constant battle between who Stafford thinks he has to be and who he actually is, is played out on most Sundays. There is no need to be a gun-slinger when you have the options that allow you to be a good quarterback who keeps his team competitive on a weekly basis. He has to trust his ability to give what the defense gives him on most plays and the gall to take it from them when he really needs to. If you have ever watched Stafford play, you have seen every aspect of his game and this is the season he will reveal to us who he is, at least as a Lion.

Week 2 allows all of these issues to be addressed and allow fans and other teams see what this team will actually be, contender or pretender.