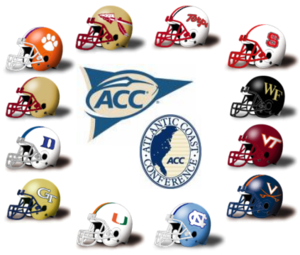 The least forgotten and seemingly most top-heavy conference in the Power 5 has a lot to prove this season. With Jamesis Winston playing for the Tampa Bay Bucs the league needs to find a new face and that face could very well be running back James Conner from Pitt. Before the in-depth look at individuals let’s break down the divisions within this most intriguing conference.

ATLANTIC DIVISION
There’s no way to start the discussion about the ACC without starting with the Florida St. Seminoles the best team from the past three years in the conference and an inaugural participant in the College Football Playoff still appears to be the cream of the crop in the Atlantic Division. The QB situation is very secure with Sean Maguire battling Notre Dame transfer Everette Golson and redshirt freshman J.J. Cosentino. The key to this team will be the balance on offense and opportunistic approach on defense. RB Dalvin Cook will be the spoon that stirs the Seminoles stew especially early in the season — that’s if he can regain eligibility, if not, it could be big unknown at the position.

The Clemson Tigers appear to be one year away from taking FSU’s crown with their loaded recruiting classes finally maturing. This year if things align in their favor they could execute a coup a year ahead of schedule. The answer to that question firmly rests upon the shoulder of rising star QB Deshaun Watson; the versatile passer looks to take a huge step and bring the Tigers offense along with him. The toughness of this schedule is by far the highest in the league, but that leaved a little more wiggle room and the opportunity for them to be battle tested during the highly important November conference match ups.

The team who is the real wildcard at the top of this division is the Louisville Cardinals. The offense lost a plethora of players, but young depth will quickly fill those roles with QB Reggie Bonnafon stepping in as the leader on offense. Junior WR James Quick will help make the transition smoother after losing Devante Parker to the NFL Draft. The Cardinal defense was known to make key plays that allowed them to overcome some daunting obstacles last season. Bobby Petrino will have to coach up this team and quickly develop the young talent he has in order to reach the peak of the Atlantic division.

The North Carolina State Wolfpack has a favorable schedule that could have them jump into the upper tier of the division; getting all the powerhouses at home with the exception of Florida St. QB Jacoby Brissett needs to improve upon his 25 TD season and keep the interceptions down. The offensive line must continue to create holes for RB Shadrach Thornton. Defensively, the line is the biggest question losing multiple starters to a team who was not very good against the run to begin with.

Boston College Eagles is one of a number of the middle of the pack ACC teams that could shift up or down depending on the execution and development of young players. A new QB, Darius Wade, and new OC Todd Fitch would usually spell a recipe for disaster and probably will replacing the entire offensive line. BC will need the running game to flourish to allow the offense to develop and Jon Hillman will be looking to have a breakout year. With an aggressive run stopping defense will help the Eagles be better than last year; wherever this team goes the defense will lead them.

Returning 13 starters from last years team is great for any team, but the Wake Forest Demon Deacons also boast one of the worst offenses in FBS last season. The benefit this team had is a young QB, John Wolford, who took the lumps along with his offensive line who surely will protect him better than last year, giving up almost 50 sacks. The young WR corps will have to stretch the field to allow the inexperienced backs time to make a true impact. The front seven will have to dominate in order to give the young defensive backfield the opportunity to gel. The operative phrase for this team is young, but will lead to this team being ready for a breakout season during the 2016 campaign.

One of the few bright spots for the Syracuse Orangemen is fifth year senior QB Terrel Hunt as a run first play-caller will be their biggest threat. Steve Ishmael is the veteran receive who will hopefully allow the passing game to develop into a viable option. The linebacking unit will be the backbone of the defense led by Zaire Franklin in the middle. Improving upon last years record will be hard pressed with a new offense and the majority of the defense being newcomers. Syracuse needs to use this year to show competitiveness and surprise teams as the evolve through what could be a long season.

The Coastal division appears to be a 3 team race, but Georgia Tech Yellowjackets should come out on top. Having QB Justin Thompson back to lead the Yellow Jackets in trying to repeat as the most proficient rushing game in the nature. The bulk of the offensive line is returning which should take away the sting of losing over 2,000 yards of production from last year. The one good thing about the GT defense is they don’t have to face their own running game, but definitely need to shore up the rushing defense this season. The defense will rely on the impact of Adam Gotis and Jabari Hunt-Days. Clock management will be key in order to reap the benefits of a superb rushing attack.

Beamer ball will have to start fast and furious in order for the Virginia Tech Hokies to win the Coastal division. The highly-anticipated rematch with the #1 Buckeyes in Blacksburg could be the catalyst to a special season. QB Michael Brewer and OC Scott Loeffler must bring the offense from the potential is has into realization of dominance. The three-headed weapon at the receiver position: Isaiah Ford, Cam Phillips and TE Bucky Hodges will help elevate the offense. Kendall Fuller is the heart and soul of the defense and will assist while the linebacker corps elevates their play.

The Pitt Panthers made a coaching change and may have gotten it right hiring defensive guru Pat Narduzzi. James Conner is the heart and soul on this team and should allow the Panthers to control the clock to allow Tyler Boyd and the much-anticipated aggressive to take some of the pressure off of them. QB Chad Voytik should be able to take the big step with the success he experienced at the end of last season. No one of the defense should benefit more than the defensive backfield who should increase the rate of interceptions astronomically.

Al Golden’s Miami Hurricanes arguably has the most talent in the league, but has failed to show it on the field. This has to be the season they breakout and if they do the rest of the league will be in trouble. The Canes have the QB that could lead them to the promise land in Brad Kaaya; he will have to use his athleticism to will Miami to success while an inexperienced offensive line works to come together. The defense has been a liability in the past, but the development of a stellar defensive backfield could be their only shining star.

In Chapel Hill the North Carolina Tarheels are looking to combine an experience offense with a revamped defense. QB Marquise Williams is back as the leader on offense and looks to have another impressive campaign. He has an experienced backfield and WR unit that will take the pressure off his legs and allow the offense to develop even further. The defense has nowhere to go but up and with Gene Chizik it will much sooner than most expect. Even though the defensive backfield is the more experienced position on defense this team will sink or swim on the back of MLB Jeff Schoettmer. The transition to a more traditional 4-3 defense will also bode well for the overall success of the team.

The Duke Blue Devils appear to be in rebuilding mode after losing significant leadership especially at the QB spot, replacing Anthony Boone. There will be an all out battle for the starting job between Thomas Sirk and Parker Boehme. Either one will need someone to emerge as the go to receiver considering they are all young. Duke may surprise some conference foes with their defensive strength being the secondary returning all starters from last year. Playing an aggressive style of ball will be the only way the Blue Devils will be able to hide the youth and inexperience they possess.

The path has been cleared for QB Greyson Lambert to lead the Virginia Cavaliers; the question remains does he have enough rally the troops out of the cellar. RB Taquan Smoke will finally get the opportunity to see if he can live up to his high school rankings. T.J. Thorpe should be the leader of a receiver core that can really make like easier for Lambert. The defense must be even more effective at taking away the ball and making key stops than last year in order to save Head Coach Mike London’s job. Key contributors on the defense will be S Quin Blanding and DT David Dean.

With the talented Mr. Watson leading them, the Tigers finally find a way to get past the Seminoles to win the division and the term “clemsoning” can finally be retired. I think Tech making it out of the Coastal division is more about the lack of a challenge from the other teams more than the Rambling Wreck being that much better. Dabo Swinney finally gets the proverbial monkey off his back and raises the ACC championship trophy Clemson 31 Georgia Tech 27

A: Florida St. vs. Georgia Tech
The lack of depth in this conference will let the cream rise to the top. This game’s outcome relies on how tough the Seminoles defense is against the run happy Yellow Jackets. Jimbo will have his guys prepped and ready for a potential return to the FBS Football Tournament. FSU-27 GT-20