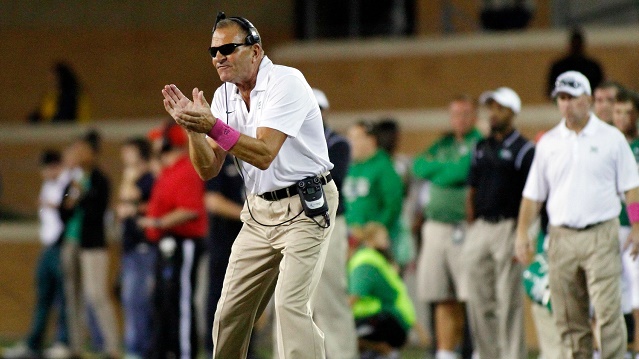 A season that started with promise in Denton TX was quickly derailed when the North Texas Mean Green lost four consecutive games but in front of a Homecoming crowd of 20,957 UNT was able to celebrate its 1,000th game as a program with a 31 to 10 victory over the Florida Atlantic Owls to move to 3-6 (1-4) on the season.

When you glanced at the box scores of the previous four games, it was easy to see why the team lost:

Against the Indiana Hoosiers the defense allowed a season high 363 rushing yards.

Despite outgaining the University of Alabama-Birmingham 454-448, there were five turnovers, including three that resulted in defensive touchdowns, that ultimately did the Mean Green in.

They were tied with the Southern Miss Golden Eagles 20-20 late in the third quarter but were eventually done in by a pass defense that allowed 305 yards including a 19 yard touchdown pass that gave the Golden Eagles the 27-20 lead.

Against the Rice Owls the rush offense was non-existence as the team combined for only 79 yards but because quarterback Andrew McNulty was sacked multiple times and loss 38 yards by himself, the total decreased to only 26 yards.

But on Saturday against the Owls it seemed as if both sides of the ball were finally able to generate more positives than negatives.

“This is a good statement win for us,” said Head coach Dan McCarney. “There’s a lot of integrity and character in this team. It was a real good team win.”

The biggest statement came from McNulty who played his best half of football this season as he completed 12-of-16 passes for 106 yards and one touchdown. The hot start was needed for a North Texas team that had been outscored 59-14 in the first half during the losing streak.

Junior Antoinne Jimmerson moved into 18th place on the North Texas all-time rushing yard list after running for 111 yards on 17 carries.  This was his second 100 yard performance of the season and according to Coach McCarney it was done with the young man battling a high temperature the day of the game.

Defensive end Chad Polk (three tackles-for-loss) and defensive back Kenny Buyers (interception) were the stars of a Mean Green defense that even their most famous alum would be proud of. On the night FAU was limited to 197 total yards and only converted 30% of its third-down conversions – during the losing streak they allowed their opponents to convert 48%.

The victory improves North Texas’ all-time homecoming record to 42-22-1 and gives the program a 4-0 record against the Owls. This Saturdaythe team travels to El Paso, TX to take on a 5-4 UTEP Miners program that is coming off of a 35-27 loss to Western Kentucky. The Mean green rush defense will be tested if Miners leading rusher Aaron Jones is healthy enough to play. He missed the WKU game and it showed as the Miners struggled with offensive balance all game