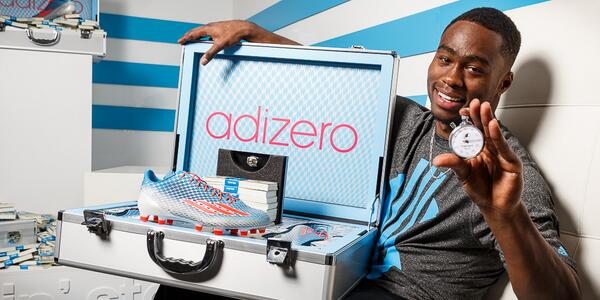 For NFL prospects, one of the most important drills in preparation for the NFL Draft is the 40 yard dash. A slow time can cause a prospect to slide down the positional rankings — thus costing them hundreds of thousands of dollars. But in the case of Brandin Cooks, a wide receiver from Oregon State University, a fast time can get win you money even before you are drafted. His 4.33 forty yard dash time at the 2014 NFL Combine in Indianapolis, IN. won him $100,000 courtesy of Adidas.

Prior to the combine cbs.com ranked Cooks as the seventh best wide receiver prospect for the 2014 NFL Draft. But after posting the fastest time out of his positional group, in addition to showing great ball skills during the other drills, the 5’10 190lbs receiver should now have the attention of more general managers of NFL teams who are looking for a talented slot receiver.

Looking to steal some of the attention from the official NFL licensed super-power Nike, the German based company decided to recognize the fastest athletes during the combine who were wearing Adidas apparel — Dri Archer posted the fastest time of the weekend, 4.26, but the Kent St. back was not eligible.

In addition to the $100,000 prize given to Cooks, Adidas also handed out $10,000 prizes to the fastest competitors at their respective positions:

Running Back: Henry Josey of Missouri 4.51

(italics denote the overall fastest participant out of that position group)

Because the contest did not recognize every combine participant, there is plenty of debate over who truly is the fastest from the 2014 combine. This could even lead to individual races between some of the guys but even if the Adidas recognized runners dont win, they can just blame the extra money in their pockets as to why they had a slower time.