Seattle Seahawks cornerback Richard Sherman over the past 48 hours has become a household name invading your television screens, mobile devices and tablets. Following the NFC Championship game Sherman set the internet ablaze by what will probably go down as one of the greatest post-game interviews in NFL history. When asked by side-line reporter Erin Andrews about the the final play where he deflected the Colin Kaepernick pass which led to a game-sealing interception, Sherman emphatically responded “I’m the best corner in the game… when you try me with a sorry receiver like Crabtree, that’s the result you going to get. Don’t you ever talk about me. Don’t you open your mouth about the best or I’m gonna shut it for you real quick.”

In the 24 hours following the interview, Sherman gained over 300,000 Twitter followers and the reactions from his post-game rant ranged from humorous to downright racist. On social media sites such as Twitter and Facebook, Sherman was described as a “thug”, “showboat”,  ”an attention whore” and even a “fricken jungle monkey”.

Overall the statements made some people a little uncomfortable. In my opinion the racial slurs and the depiction of Sherman as a Thug was simply inappropriate and mostly ignorant. Sherman, who is a Stanford graduate, also graduated second in his High school class with a 4.2 GPA. 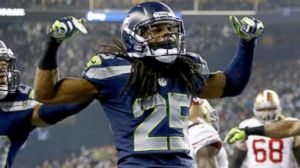 My reaction was simple “It’s a game!!!” People are making a mountain out of a mole hill. The number one thing I took from the Sherman rant and reaction was that America is simply too sensitive. At the end of the day we all have to learn that Sherman isn’t an evil villain planning to take over the world or a “thug” who mugs old ladies in his spare time. Sherman is simply a talented athlete that had just made a decisive defensive play to send his team to Super Bowl XLVIII. Don’t get me wrong Sherman isn’t a saint and to be honest he’s one of the cockiest players in the league who has never shied from a camera.

Despite Sherman’s bravado the most important thing to realize is that he actually backs up his words with his talent and performance. Sherman is indeed one of the best corners in the game leading the NFL this season in interceptions and is currently the catalyst for the #1 defensive team in the league. You really can’t argue with the results no matter what anyone thinks the facts still remains that Sherman and the Seattle Seahawks are NFC Champions and are heading to Super Bowl XLVIII at Met Life Stadium in East Rutherford New Jersey.

Heading into Super Bowl media week, Sherman along with Denver Broncos QB Peyton Manning will probably be the top of every media request list . Manning, who is looking to capture a second Super Bowl title, is going into the game looking to finally silence those who doubt his ability to win the big games.

After-the-fact Sherman has since apologized for his actions “I apologize for attacking an individual and taking the attention away from the fantastic game by my teammates.”

At the end of the day Sherman truly realized that his words overshadowed not only his teammates but the entire game. Hopefully Sherman has learned that sometimes numbers and results can speak louder than words.

3 thoughts on “Richard Sherman: The Rant Heard Around The World”