There is not a lot that you can do in .3 seconds and on Tuesday night the USF Bulls and the Florida Gulf Coast Eagles found out that you can’t catch, shoot and have a basket count… even if your eyes show you something different.

After guard Anthony Collins made only one of two free throws to extend the lead to 68-66, it appeared that it would take a last-second miracle by the Eagles to send the game into another overtime.

The prayer was almost answered when FGCU guard Jamail Jones in-bounds pass over the outstretched arms of 7’3 center Jordan Omogbehin landed in the hands of forward Chase Fieler who then made short jumper prior to the shot-clock buzzer going off.

However NCAA rules state that under .4 seconds the only allowable shot is a tip-in, even though video replay showed that Fieler released the shot before the time clock expired.

“It’s a rule,” said FGCU Head Coach Joe Dooley. “They saw what they saw and they called what they called and that’s the way it is.”

While the tough loss drops the Eagles to 5-5 on the season, there was a silver lining in defeat — the great performance from guard Bernard Thompson.

The Bulls were led by Victor Rudd’s 23 points (seven in the overtime periods) along with 14 rebounds and despite another poor shooting night from Corey Allen Jr. and Anthony Collins (thirteen combined points on 5 of 20 shooting) the victory moved the Bulls to 7-2 for the season.

It was the third straight victory by two points for the Bulls and the first game after having a ten-day lay-off since their last game, a victory over the Alabama Crimson Tide 66-64 on December 7th.

“When you are coming out of exams and have a long layover you never know how your team is going to be,” said Coach Heath and early on the team showed some rust from the rest.

11 of 33 shooting from the field, one-of-6 from 3-point distance and zero free-throw makes in two attempts — but even with those off numbers, the Bulls held a 23-21 lead going into halftime. 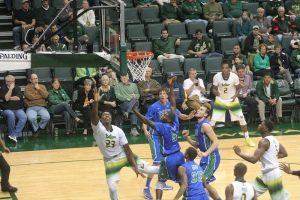 “We were one-pass-shot in half-court offense and we weren’t getting the ball from side to side or inside out,” Coach Heath admitted in response to the first half shooting woes. “…We just talked about having a little bit more patience.” The talk helped as the team improved its shooting percentage by 18% for the second half and made it a point to get more interior shot attempts. Forward Chris Perry finished the game with 10 points and was more aggressive with his looking to score from inside after halftime.

While the team collectively shot better from the field, inconsistency at the free-throw line (seven-of-20) continued to be a problem. An uncharacteristic five misses by Anthony Collins and three by Rudd and freshman Chris Perry kept the Eagles in the game. — against better teams the Bulls may not be fortunate enough to end the game in victory if they continue to shoot this bad

Starting with Florida A&M on Thursday, the Bulls have three non-conference games remaining to improve their free-throw percentage before they open conference play against the Memphis Tigers on New Years Even at the Sun Dom

If the struggles continue, it could be a long season for USF and Coach Heath could end up looking and feeling a lot older than the 49 years he celebrated on Tuesday.