The game that the entire city of Detroit has been waiting for: The Public School League Championship. 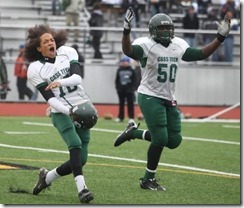 This game of the top two teams in the city as well as the state will take place at Ford Field on Friday October 25th at 5:00 pm

The stands will be full of die-hard fans of both programs as well as college recruiters looking for that next big star from these two successful schools to add to their collegiate roster in the future.

Throughout the week we will feature the historical look at this rivalry from the fans, players and coaches.  To get this started off right, we want to know what you think….results will be revealed on the show this Thursday.

The only question left is….Who You With?????