For a program that is struggling to find anything positive to focus on during this 0-4 start to the 2013 season, accomplishing that small goal in Saturday’s 49-21 defeat to the 15th ranked Miami Hurricanes is a significant building block for Head Coach Willie Taggart as he looks to turn the season around heading into conference play.

Making the first collegiate start of his career, quarterback Steven Bench had the best game of all the quarterbacks who have played this year going 13-of-27 for 189 yards and one touchdown.

And while he still has to work on protecting the ball better — he had two fumbles and one interception, the redshirt sophomore showed the ability to move the offense down the field well enough to perhaps end the ongoing quarterback carousel — which had seen three different starters in the four games. 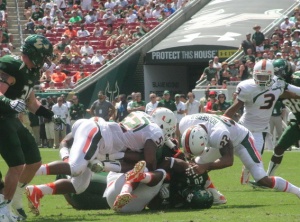 Even with the inconsistency at the quarterback position and teams being able set up its game plan to stop the run, senior Marcus Shaw is turning into the runaway favorite for team MVP.

Running for 127 yards on 20 carries, including a 44 yard scamper that set up a short touchdown run for him, the 5’9 178lb back continued to display great vision and the ability to run between the tackles — For the season he already has amassed 525 yards on just 77 carries.

This was his third game eclipsing the 100 yards mark for the season and the one game he didn’t, he still ran for 94 yards.

If Shaw is the team MVP,  the defensive all-star has to be DeDe Lattimore. The senior out of Athens GA, continues to be a force from his linebacker position. He once again led the team with nine tackles and also forced two fumbles in the second quarter which stifled some of the Miami momentum for the moment.

For the season Lattimore has 40 tackles and an interception to go along with the forced fumbles. 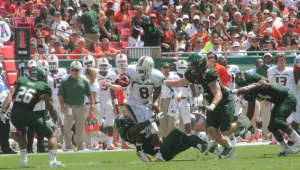 As the team heads into the American Athletic Conference opener against the 3-1 Cincinnati Bearcats this Saturday, Coach Taggart is looking for more consistency from the team.

Part of establishing that necessary consistency came in the team winning the fourth quarter in which they outscored the Hurricanes 14-0 — and while it was against Miami’s second and third stringers, the team understands that it has to start somewhere.

If they can continue to win quarters, that will help give them the confidence in knowing they are capable of winning games as well.