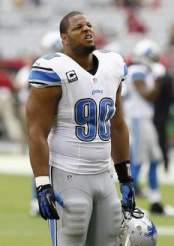 It didn’t take long for someone to try to take justice into their hands against the NFL’s most hated player Ndamukong Suh. In the 4th quarter of Sunday’s game between the Arizona Cardinals and the Detroit Lions, rookie offensive lineman Paul Fanaika attempted to cut block Suh.

There was two problems in the attempt:

one: it was feeble and it barely budged the 300lb defensive lineman

two: If Suh would have gone down with an injury because of the block, Commissioner Goddell would have had no choice but to reprimand the rookie due to its obvious intent since the hit took place away from the play.

Moving forward should Suh expect to see more of this from other offensive linemen, yes. Is it right, no it isn’t, but this is what happens when you do things that other players feel is dirty.