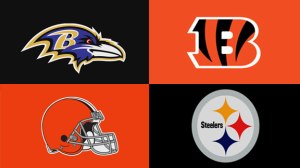 Being the division that the last two AFC Super Bowl winners, Baltimore and Pittsburgh, call home, one would expect the focus to be on those teams, but it’s the teams that reside in the state of Ohio that have been getting the bulk of coverage this off-season and being featured on the HBO series “Hardknocks” has helped Cincy, whereas in the past it brought negative publicity to the participating franchise. The pendulum is swinging up for the Cincinnati Bengals and the Cleveland Browns as management realize that the formula for winning is building a very good defense. Ironically, it’s the major changes on that side of the ball  that have some thinking that the Baltimore Ravens and the Pittsburgh Steelers may be on a downward swing when it comes to the dominance of the division, giving an opportunity for a new team to represent the division and maybe even the conference. Mike Silver and Darren Sharper of the NFL Network have already selected Cincinnati as their AFC Champion

Dont forget to tune into Sports Q&A radio tonight to hear Q & A’s thoughts on the division and who do they have winning the division.

We don’t rebuild, we reload

A phrase often used at powerhouse collegiate football programs who are able to stay competitive from year to year even with players graduating, because the incoming freshmen are just as talented, general Manager Ozzie Newsome and the Baltimore Ravens organization have taken on a similar approach when it comes to replacing players who have left the team… and it seems to be working well. You would think after losing Ray Lewis, Ed Reed, Paul Kruger, and  Dannell Ellerbe would have Head Coach John Harbaugh reaching for the anti-acids, not so fast… just as quickly as they lost the talent, they added capable replacements: rookies Arthur Brown, Matt Elam, John Simon as well as established veterans Elvis Dumervil, Darryl Smith, Marcus Spears and Michael Huff, all of which are being counted on to assist returning stars Haloti Ngata, Terrell Suggs and Ladarius Webb in ushering in the new phase of Ravens defense. Finding a leader on that side of the ball will be the key to making that transition a smooth one; while Lewis’s play on the field had diminished in recent years, no one could argue the impact he made as the emotional catalyst – How quickly someone steps into that leadership role and establishes cohesion between the returning players, rookies and free agents will determine if they are able to make another long playoff run this year or let someone take the top slot for the moment.

I want that old thing back…

And for the Pittsburgh Steelers that thing is a running game and a defense that has its production matches its reputation. For the 2012 season output in both categories were atypical of traditional Steelers teams of the past  and could have been the direct reason why the Steelers missed the playoffs for only the second time under Head Coach Mike Tomlin. Since 2010 the leading rushers’ productivity has decreased by roughly 300 yards each year going from 1273 to 928 in 2011 to a paltry 623 yards in 2012… and with the recent Lisfranc injury to rookie running back Le’Veon Bell, which reportedly could sideline him for 6 weeks, production from that position could once again be hampered until Bell is healthy and has learned the intricacies of being a NFL back.

Defensively this team is full of names that you have to wonder if they are living off past reputations, instead of being legitimate difference makers on the field. Key players Troy Polamalu and LaMarr Woodley are both coming off disappointing seasons and are looking to have bounce-back years; plagued by injuries that only allowed them to be on the field for 20 of a possible 32 games, it is critical that they return to their all-pro form in order to stabilize a defense that was ranked #1 last season but saw the departure of leaders Casey Hampton and James Harrison and the continued limited production from former first round selections Ziggy Hood and Cameron Heyward. If they don’t step up, this will be another long year for the Steelers organization full of aging stars who are watching the window of championship opportunity close at an increased rate of speed.

After making the playoffs two consecutive years the Cincinnati Bengals and their fans have to feel that they are ready to take the next step; for them that step is a division title and maybe home field advantage in their first game. Those lofty goals are not out of the question when you consider the rivals in the division are in “reload” mode, Baltimore, and looking to recapture a past identity, Pittsburgh. Before Bengals fans start ordering play-off tickets they have to realize that success is based on them finding a consistent running game and a receiver to compliment AJ Green. While Benjarvis Green-Ellis was ok last year in running for 1094 yards and 7 touchdowns, the team still was not explosive from the position and it was reflective in his 3.9 yards per carry average; so to rectify that issue they drafted Giovanni Bernard from North Carolina in the second round. The former Tarheel runner’s 6.7 yards per carry average shows that big play ability that Bengals running game has lacked for years — he is also a capable receiver as well, catching 92 balls in two seasons. While no one expects him to come in as a rookie and take the lion share of carries, if he can team with Ellis to force defenses to put seven in the box, it will give more one-on-one opportunities to the receivers looking to make things easier for the pro-bowler Green.

The question becomes… who is that other receiver? In 2012 Green was targeted 164, but only had 97 catches which equated to a 59% target/completion success rate, the next highest receivers: Andrew Hawkins and Brandon Tate were only targeted 80 and 25 times respectively, which is sad considering their potential. It may not even be about a new receiver stepping up, but more about quarterback Andy Dalton having enough faith in the other receivers to share the wealth. Throwing to other receivers more could raise the success rate of completions with Green, because defenses could not double team him, thus making the offense more dangerous.

Age aint nothing but a number…

Unless you are Brandon Weeden, starting quarterback for the Cleveland Browns. Only in his second year, Weeden is already older than most veteran quarterbacks in the league and because of this, the organization may not be completely sold on him being the longterm answer at quarterback — for him the future would have to be now even though he still is learning how to be a NFL quarterback. Going into the 2013 season in order for Weeden to maximize his potential as the Browns signal caller, General Manager Michael Lombardi has a decision to make:

Fully invest in Weeden by giving him the tools needed to succeed:

Norv Turner was hired as offensive coordinator to work with Weeden on the fundamentals of the position and while he had his struggles as a head coach of San Diego the work he did with Troy Aikman and the Dallas Cowboys offense was remarkable, improving from last in total yardage per game and averaging 15.1 points per game to ninth in total yards and averaging 21.4 points per game in the first season. And while it is only the pre-season, Weeden has already shown vast improvements in his mechanics and decision-making skills during the first two games under Turner’s tutelage.

Play out this season with the current quarterback and look for a younger replacement in the 2014 draft:

Often times new management and coaches want payers they feel the most comfortable with and that is often developed in the scouting and interview process leading up to the draft and free-agency period; for the Browns to bring in another quarterback and essentially start over again at the position could set the franchise back two or three years  in development which would send a bad message to current players that they aren’t interested in winning now  — and how long would it be before the other talented players on the roster begin developing an exit strategy…

Expecting a franchise, that has struggled with personnel decisions since the late ’80s, to make the right decision now has to be frustrating for a fan base that wants to see the team win and are loyal, even to a fault.