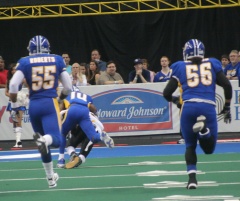 On a night they clinched a playoff berth and also set the AFL season record for attendance with 16,118 fans you would think that it would have been a time to celebrate for the Tampa Bay Storm organization, but head coach Dave Ewart has to be very concerned at how the team has been playing during what is now a six game losing streak after falling to the Pittsburgh Power 48-37 Saturday night.

Many point to the loss of starting quarterback Adrian McPherson, who hasn’t been under center since their last victory, a 65-62 win over the Iowa Barnstormers in week 11, as the primary reason for the sudden downturn in the season, but those who have followed the team closely realize that as much as the offense has sputtered, it has been the defense inability to stop anyone on a consistent basis that has caused many of the losses. In an eight game stretch in which they have  gone 1-7, the defense has given up an average of 59 points a game while the offense only scored 49 points per game and while that margin may not seem that large when you surrender 60 plus points in four of those games while only reaching that plateau only once yourself, it’s not a good sign. 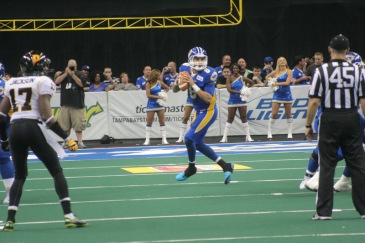 The inconsistency on both sides of the ball continued Saturday evening with stand in quarterback Randy Hippeard only having 202 passing yards on 25-45 passing attempts and 4 touchdowns. Arena football is a high paced sport that allows for quick-strike scoring opportunities through your passing game, so to have your offense produce under 300 yards is unacceptable especially when the running game is not a featured weapon on most teams. One bright spot of the offense was former Florida State Seminole receiver Chris Davis improved play. On the night he caught 10 balls for 88 yards and 1 touchdown and in the four previous games he has 30 catches for 364 yards and 5 touchdowns compared to 31 catches 301 yards and 5 touchdowns over the first 12 weeks of the season. As he has been most of the season, Joe Hills was consistent and steady and while his yards weren’t as high as they had been still posted 7 catches for 49 yards and 2 touchdowns as he added to his gaudy seasonal stats which now sit at 122 catches for 1717 yards and 41 touchdowns. 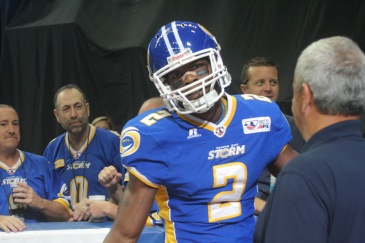 Defensively the team had its moments in the first half which were highlighted by a sack in the endzone by defensive lineman Rodney Beamon which made the score 14-9 late in the first quarter and a 48 yard fumble return for a touchdown by R.J. Roberts that gave the Storm an early 16-14 lead. And while the score was 23-21 going into the 4th quarter, the defense didn’t show the confidence of being able to slow down the Power offense enough for the offense to seize control of the game. Power quarterback Shane Austin kicked off the scoring in the 4th quarter with a 16 yard touchdown to Mik Washington which capped a long drive for AFL standards of 8 plays and  5:15 minute that started with 3:20 left in the 3rd quarter. This would be the first of two touchdowns between the pair, who also combined for 4 more catches and 70 yards. But the play of the game came when Austin, who 18-32 for 249 yards 4 passing touchdown and 2 more rushing touchdowns, hooked up with Tyrone Collins for a 44 yard bomb that saw the rookie out of Wagner University make a diving and slide into the endzone catch to give the Power a 35-30 lead that they would not relinquish the rest of the game.

Trailing 42-30 and a chance at a comeback still possible, the highlight play of the game for the Storm came when an endzone pass by Randy Hippeard that was intended for Joe Hills hit the goal post ricocheted and just before falling to the ground was secured by the diving Jason Chery to cut the lead to 42-37 with 55 seconds left in the game. Unfortunately for the Storm faithful who came out to celebrate “fan appreciation night”, they didn’t get to see their team complete the comeback as Shane Austin sealed the victory with his second rushing touchdown; a 9 yard scamper making the  score 48-37.

As the Storm head to Jacksonville to face the division leading 11-5 Sharks, the team looks for something to build on as they hope to pull off an upset in the first round but if not,  the stressful look of team president Derrick Brooks after the game could be the sign that there are major changes on the horizon this off-season for the team.