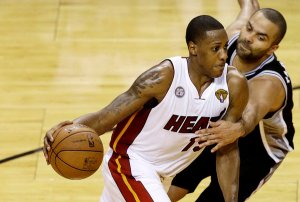 Channeling his video game hero namesake, point guard “Super” Mario Chalmers was came through to save the day, but in Game 2 of the NBA Finals it was a king and the Miami Heat that needed rescuing instead of a princess. With LeBron James in the midst of one of his worst shooting games in the playoffs, going 7 for 17 for 17 points, the Miami Heat needed someone to step up and the enigmatic point guard came through.  Going  for 19 points  2 assist and 4 rebounds, the fifth year guard out of Kansas proved for at least one night that he was right in feeling that he was a top 10 pg in the NBA as Miami tied the series 1-1 with a 103-84 win over the San Antonio.

In addition to having no answer for Chalmers, the once steady ball handling of the Spurs, that only turned the ball over four times in Game 1, was replaced with sloppiness that saw this veteran team not only match that number in the first quarter but end the game with 16. The one saving grace in the blowout was that they did get a good contribution from a pair of role player; Danny Green chipped in 17 points with 5 for 5 coming from deep and Kawhi Leonard who had 14 rebounds 8 on the offensive side which kept the Spurs in the game, in spite of off shooting night from their own version of the Big 3 Tony Parker Tim Duncan and Manu Ginobili, and was even leading by one early in the third quarter, but an and-1 layup by Chalmers set off a 33-5 run that killed any hope of San Antonio heading home with a 2-0 series lead.

What the Spurs must do in Game 3:

Less is more: In this case turnovers… While the four they had in Game 1 may be an aberration, 16 in Game 2 definitely were too many. In order to keep the home crowd in the game they must establish tempo early on and that can only be accomplished by holding onto the ball and being able to run the offense how Coach Popovich wants it.

The stars have to shine bright: Danny Green, Kawhi Leonard and Gary Neal combining for 36 points and 17 rebounds is good but they will need their go to players, Tim Duncan (3-13) and Tony Parker (5-14) to have better shooting games, with Parker also cutting down on the 5 turnovers. Early on the team was able to stay in the game in spite of the off shooting night, but as the game wore on and the help cooled off, fans realized how important it is for those to hit a decent percentage of their shots.

What the Heat must do in Game 3:

Never be satisfied: While the final score was a blowout, the game was still in doubt midway through the third quarter and you can expect the Spurs to play a lot better with some home cooking in their system, so Coach Spoelstra has to keep the team in the mindset of this being a dogfight and that they must always play with a sense of urgency, especially on the defense, because at some point those missed shots will start to go in.

Let the king rule how he has been: While some will argue that Lebron James has had unspectacular finals, outside of that outstanding block of Tiago Splitter dunk, he has actually played the way his teammates need him to in order to be successful. In an interview prior to Game 2 James was quoted as saying “I’ve done more and lost before” in reference to the 2009 Eastern Conference Finals series with Cleveland against the Orlando Magic where he averaged 38.5 ppg 8 assist per game and 8.3 rebounds per game and they still lost the series 4-2. So while even he would like to have scored more than 17 and 18 points in two games, he has done enough in other aspects of the series, 26 rebounds 17 assists and 3 blocked shots, to be a circus shot away from being up 2-0 in the series. 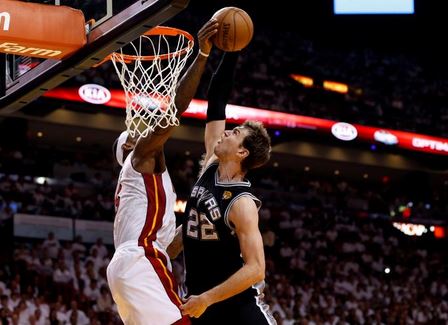 Each team enter into Game 3 in a position they wish they weren’t in, tied,  but will take it nonetheless with the fate of the series usually being on the side of the team that wins Game 3… so its safe to assume that both teams have a lot at stake. It’s crazy to assume that  the Finals three biggest stars LeBron, Duncan and Parker would to continue to shoot as low of a percentage as they have in the first two games and because of that increase from all three combined with playing at home for an advantage, the Spurs do just enough to regain control of this series… Spurs 91 Heat 87