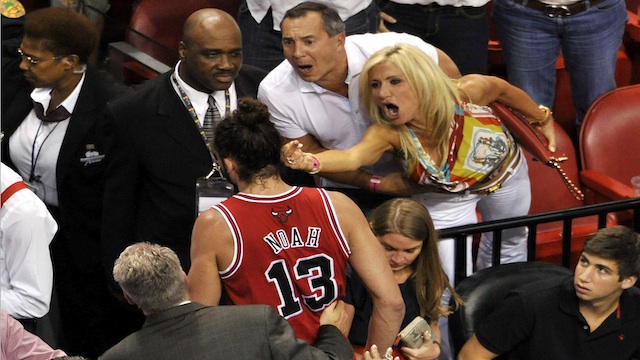 What would you have done if you were Joakim Noah? Interestingly enough the fan picked the right Bulls player to heckle; while Noah is very energetic on the court, he is mild-mannered off of it.  Had it been Nate Robinson or even Carlos Boozer, no one would have been shocked to see either one confront the fan with the same negative energy she gave them, which could have ended in a NBA PR nightmare.

We at Sports Q&A are all about fans being passionate for their favorite team but when you stoop to this level of disrespect, something needs to be done. The officials at American Airlines Arena need to ban this woman from any event held there due to her terrible behavior because this cannot be tolerated anywhere regardless of who the person is. The woman, later identified as Filomina Tobias, was once suspected of murdering her husband Seth Tobias a former CNBC commentator and financial whiz, and in a phone interview with the Sun Sentinel her daughter Victoria Racaniti had this to say;

“She’s embarrassed, but she is being a good sport… She was having fun just like any other fan. All she has to say is that people need to get a life.”

If this is what she considers fun this lady has bigger problems beyond being a rude fan… in no way is funny and she wouldn’t have been saying that if Noah would have reacted to her hand gesture like many fans feel he should have.

With social media and the internet making the world smaller, sports fans are now closer to their favorite athlete and because of this think that just because they follow them on Twitter or like an Instagram Photo of theirs, they are entitled to say or do what they feel, even if is disrespecting them. Is this outburst a sign that we may need to put back up the invisible divider between athlete and fan or has the line become so blurry that it is now unable to be re-established some type of protective boundary.