Contrary to what was speculated and misreported yesterday, Louisville associate  athletic Director for media relations Kevin Klein has come out and debunked any false reports  about how Kevin Ware and his family would bear the full burden of the anticipated large medical bills that would be incurred due to the tragic leg injury he suffered during the regional finals of the NCAA tournament in Indianapolis Indian.

“There is generally no out-of-pocket medical expenses for the student-athlete or his family, and none for Kevin in this instance,” according to Klein, who spoke on behalf of the university today.

For all Louisville athletes, their personal or family insurance serves as their primary medical coverage, with the university acting as co-provider for athletic injuries.

Because of the added risk that comes from playing in larger venues in which they normally have to bring in raised floor to play upon, the NCAA has a special catastrophic insurance policy for championship events with a deductible of $90,000 and a maximum benefit amount of $20 million (which normally only kicks in when players become disabled due to their injury)

While Louisville is doing the right thing and removing any responsibility of Kevin Ware and his family of this massive financial burden, there still are plenty of circumstances where the athlete and his family have to pay out-of-pocket, so there has been a petition circulating the internet to begin the dialog to bring about change across the board.

As many have been, we at Sports Q&A continue to pray for Kevin Ware as well as his family and wish him a speedy recovery. It was such an inspiring moment seeing him with the regional championship trophy 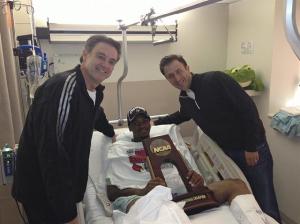 One thought on “Louisville to cover Kevin Ware’s medical bills”