With the NBA All-Star Game upon us this is the perfect week to start off our new weekly feature Classic Battle. This feature will go across all competitive fields of competition and during the most relevant times of year.
We hear all the talk right now discussing MJ and his thoughts on Kobe over LeBron….that comparison would be too easy. So instead it was decided to dig a little deeper and compare today’s “great” players vs. those of the pinnacle decades of that sport. Of course the 80s is when the NBA became Fantastic right. So it was was decided to take an obscure look at the reserves from each team from ’83 and ’13. Amazing in today’s game very few true SFs make the team in a heavy G and PF/C All-Star team. So looking at name recognition only and using the criteria of a non starter and playing the same position and only comparing stats up to the year of comparison: our Volume 1 Battle is Kiki Vandeweghe vs. LaMarcus Aldridge.

We can imagine fans from each era bursting into laughter when this matchup was announced, but both sides may be surprised by the outcome. So let’s give the tale of the tape(age before beauty):
Ernest Maurice “Kiki”- 6’8 220 UCLA 1st Rd, #11 Pick of the Dallas Mavericks (refused to play for Dallas and was traded to Nuggets)
LaMarcus-6’11 240 Texas 1st Rd, #2 Pick of the Chicago Bulls (rights were traded to Portland for Tyrus Thomas and Viktor Khryapa)

Looking at the expectation of each player going into this matchup its clear that LaMarcus has more hype and Kiki clearly has more drama…..could you just image the public backlash if a player today refused to play for a team?

Before digging deeper you must know that at the point of comparison Kiki was in his 3rd year and LaMarcus is currently in his 7th. Kiki was 22 when drafted and 24 at comparison and LaMarcus was drafted at age 20 and is currently 27. Note to readers: the matrix used to compare these players will be per 36 minutes, playoff stats role on the team and the X factor.

Per 36 Minutes
So looking at the numbers to that point LaMarcus averaged 18.5 points 7.8 rebounds 1.9 assists and 1 block while Kiki put up 21.8 points 6.2 rebounds 2.7 assists and .5 blocks. LaMarcus gave Kiki a run for his money in this one, but only averaging a half a block more and less than two caroms while being outscored by 3 points and having a deficiency of about an assist gives the nod to Kiki.

Playoffs
With the playoff stats starters play more minutes, so the straight playoff average was used versus the Play 36. Each player had reached the playoffs three times during the comparison time. This battle was not as close as the regular season comparison even though only one of the players, LaMarcus, was the “go to” man on his respective team. Being the man Aldridge has averaged 19.8/6.3/1.4/1.5 split and Vandeweghe averaged 24.9/5.7/3.7/1.1. Kiki shot 54% from the field while LaMarcus shot a respectable 46%, dispite the efforts of these players neither of their teams advanced deep into the playoffs. Again Kiki comes away with the nod in playoff impact.

“Success comes from knowing that you did your best to become the best that you are capable of becoming.”-John Wooden

Both players were highly touted coming out of college and clearly have put together some great stats as well made a name for themselves in the league. Kiki playing with the run and gun Nuggets being a co-pilot with the great Alex English put up some pretty astounding numbers in the Wild Wild Western Conference. LaMarcus plays in a much different Western Conference that even being touted as the “offensive” conference couldn’t compare to the Nuggets. The major factor in this battle is where would the team be without said player? Even though Kiki was the Robin to Alex’s Batman, Dan Issel on many night filled in that role for Doug Moe averaging 20 plus point; which could be deducted he could have filled in that gap if Kiki wasn’t there. The Blazers on the other hand rise and fall on the back of Aldridge who even in injury-plagued seasons lead the team and scoring and is the go-to in the clutch. LaMarcus also has the edge defensively and the infamous athleticism. Kiki made his team better, but LaMarcus has made a bigger impact. LaMarcus wins this round.

The “X” Factor
Nicknames, patented moves and infamous moments all play into the X-Factor. So we have Kiki and L-A or L-Train…there’s a story behind a nickname like Kiki more so L-A or L-Train.
LaMarcus

When you move is part of a training video…Nuff Said!
Now the infamous moment both players have infamous moments, but both are not in their favor, so the judgment is based upon who looked better in the moment.
LaMarcus

Kiki takes another round.

“If winning isn’t everything, why do they keep score?”-Vince Lomardi

With a clear a decision victory that went into the late rounds Kiki tops LaMarcus in a battle amongst the elite in the game. 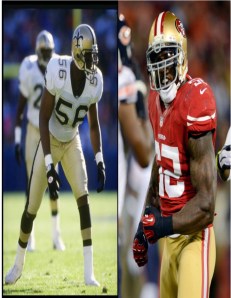